When it comes to mental health, is there a reason why Black people seem to suffer more than others? Our new health and wellbeing contributor, Valerie McKen, suggests our ancestors’ past trauma during the slavery years runs deeper than we thought.

In the summer of 2011, I took myself off to a three-day business convention in Los Angeles, California to see a business guru I had been following for a while online.

Having been in business for a number of years, I had a deep desire to help more women with their health.

By day two, I was fully immersed in the experience. Later that afternoon, with emotions running high, there was mention of “being authentic and knowing who you are” in business. Those simple words literally hit me like a freight train. In that moment, I realised that I was not being authentic and I had no idea who I was. I burst into tears and did not stop crying for the rest of the day… including the 10-hour flight home. I was an embarrassing mess. Snot and tears do not make a good look!

“Those simple words literally hit me like a freight train. In that moment, I realised that I was not being authentic and I had no idea who I was.”

From that day, my life went downhill, deep depression set in and my thriving business came to a full stop.

According to the Race Disparity Audit March 2018, anxiety and depression is most prevalent amongst Black women. Why?

Is it that we are still seen as strong, dependable and being able to cope better than anyone else? Some of us may have difficulties asking for help, perhaps pride might be getting in the way. Could it be that the ‘strong, dependable’ women is so inbred within us, we don’t even realise we need help?

It breaks my heart when I see fellow (mentally unwell) sisters walking down the street shouting at everyone or talking to ‘no one’, often repeating themselves. 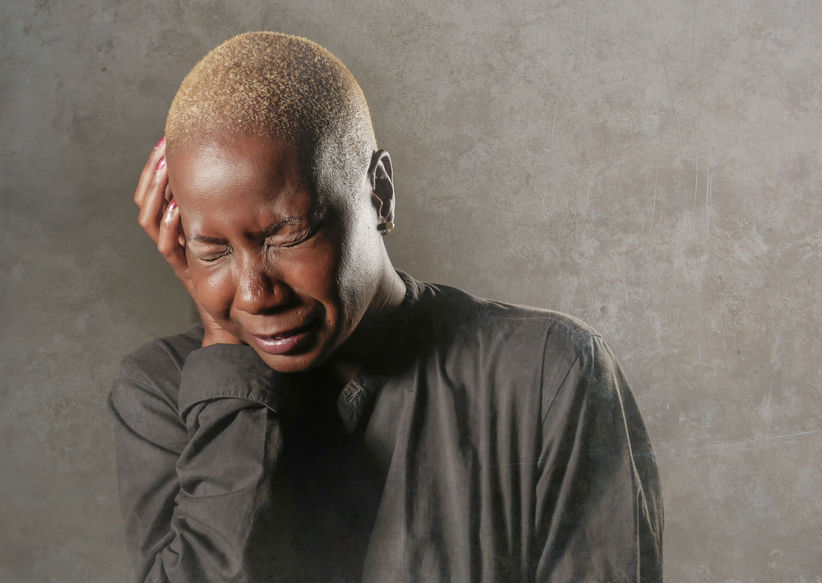 When I began crawling out from that very dark heavy cloud, I had to ask myself some serious questions. Why do Black women lead the way (and not in a good way!) in every health audit, particularly when it comes to mental health? Why is our general health in decline? Why are we at the top of the mental health table when it comes to need? What also came to mind was the lack of unity among Black people in general. These questions and observations led me back to our past.

In her book Post Traumatic Slave Syndrome (PTSS), Dr Joy De Gruy hypothesises that generations of Black people have been impacted from the African Enslavement in the 16th century to institutionalised subjugation through various oppressive tactics and repeated traumas. In theory, this would make sense. Many former soldiers suffer from Post-Traumatic Stress Disorder. Some women suffer from Post Natal Depression after the birth of a child, so it would make sense for Black women to suffer with PTSS. After all, we have never had any counselling to deal with past (slavery) traumas. In fact, many of us probably don’t believe we are affected. To my shame even I used to say, forget about slavery, it was years ago…it’s painful to admit, but if I didn’t see it, I can guarantee there are plenty of women who don’t see it either.

“Additionally, living life through someone else’s lens is bound to have a negative impact on our emotional and mental wellbeing…”

If you delve into Black history, you will realise our way of life, who we were as a people and our names were stripped away and buried. Additionally, living life through someone else’s lens is bound to have a negative impact on our emotional and mental wellbeing; it’s no different to a downloaded computer programme loaded with glitches and viruses.

Thankfully, for many sisters, the truth has been unmasked. We have the internet. This is exactly how my healing journey started. I watched documentaries such as Hidden Colors and Whited Out, plus I found a number of Black ‘Empowerers’ (is that even a word?) to follow on YouTube.

Quote from Post Traumatic Slave Syndrome: “We must return and claim our past in order to move toward our future. It is in understanding who we were that will free us to embrace who we are now.”

Healing is not going to be easy as these negative behaviours are ingrained. The reason we must heal is because of unresolved generational (mental) injuries due to trauma which began in slavery and continues to this very day. The onslaught led to unproductive, debilitating beliefs and behaviours which have in turn, produced hidden but deeply embedded wounds.

“How do you know if you have embedded trauma”

Additionally, and perhaps most importantly, we need to talk to each other and recognise when the put-downs surface. Taking responsibility for our actions and not passing the blame is also key. To help with this, there are plenty of support groups available. The first step in healing is acknowledgement of hurt feeling, resentments and grudges.

How do you know if you have embedded trauma? You won’t necessarily, but a certain event might trigger it off. My trigger was on day two at the business event in LA. Only then did I realise the extent of the problem. For you, this article might be a trigger, or someone might say something that hits you like a bolt of lightning. For many Brexit, Trump and the Megan saga woke them up! Just understand, the emotional and mental well-being journey for each person will be unique.

It’s great that there are more prominent Black women (e.g. Dr Shola Mos-Shogbamimu and MP Bell Ribeiro-Addy), speaking out against racism and the negative impact it is having on our mental health and wellbeing. It’s ruffling a lot of feathers and making the perpetrators very uncomfortable… good!

We will never change our past, however, we can use this awareness to build a stronger future for ourselves and future generations.

What Rochelle did next: new skin & hair brand launch, My Little Coco