This year’s Valentine’s Day falls on a weekend, so if you’re looking for romantic things to do, how about you make time to lockdown and chill with some of the best ‘Black love’ romance films of all time? 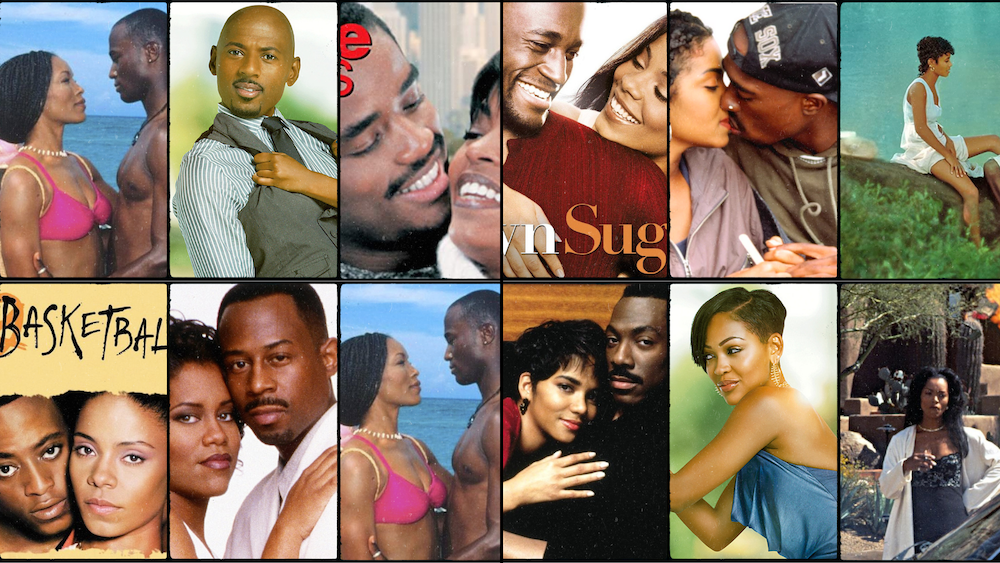 Yes, we said it! When it comes to films that celebrate no trauma, unapologetic Black love, I’m afraid we have to hand it to the Americans, they do it best.

There are dozens more titles that could have made it on to this list, but with only 10 spots to fill, and the year we’ve had, we thought you’d appreciate keeping things light and simple.

So, whether you’re chilling with a significant other, or you’ve got the giant bucket of popcorn all to yourself, fall in love again with these throwback Black love films this Valentine’s weekend.

“Love and Basketball” is a romantic classic co-produced by writer-director Spike Lee straight from the 2000s. 21-years later and the film still makes us laugh and cry as we follow the blossoming relationship between neighbours and childhood sweethearts Monica Wright (Sanaa Lathan) and Quincy McCall (Omar Epps) who end up falling in love with each other and basketball.  The plot followers their blossoming relationships with each other and basketball as you watch them follow separate paths to fulfil their dreams, but of course they reunite. This is a unique film that is just as much about basketball as it is love, the perfect way to convince your significant other that it’s not another chick flick!

Rent Love and Basketball from Amazon Prime Video for £3.49

“Poetic Justice” is a nostalgic 90s romance drama bringing back music and poetry. In her 20s at the time, Janet Jackson stars as hairdresser ‘Justice’ whose boyfriend was shot dead next to her at a drive-by theatre. Justice falls into depression and mourns until a very handsome mailman named ‘Lucky’ (the charismatic Tupac Shakur) sweet talks her. Justice leads Lucky on and tricks him until a turn of events sees them on a long road trip together with their best friends, ‘Lesha’ (Regina King) and ‘Chicago’ (Joe Torry). The 90s film also features Maya Angelou who stars as ‘Aunt June’ in the movie and wrote the poetry attributed to Justice. Poetic Justice was written and directed by the late, great John Singleton. The No.1 box office drama will have you bent over in laughter, missing the 90s and rooting for Justice’s and Lucky’s relationship.

Single ladies have you ever wished there was a rulebook that could answer all your burning questions about how to find and keep a man? That’s where “Think Like A Man” comes into play. The modern romantic comedy is two hours of hilarious relationship game playing between two groups of friends who try to play each other at their own games. Inspired by American television host and comedian Steve Harvey’s self-help book, “Act Like a Lady, Think Like a Man”. The women in the movie, Meagan Good, Regina Hall, Gabrielle Union, Taraji P. Henson and La La Anthony get hold of the best-selling book and follow the book, rule by rule. Meagan Good who stars as ‘Mya’ tests her patience and promiscuity with the ’90-day rule’ where she can’t sleep with Zeke (Romany Malco) until the 90 days is up, but tables turn when the gentleman get hold of the book and play the ladies at their own game. The cast is superb and features some Hollywood favourites and includes Kevin Hart (Cedric), Michael Ealy (Dominic), Terrence J (Michael) and Jerry Ferrara (Jeremy).

Rent Think Like a Man from Amazon Prime Video for £3.49

This warm 90s romance story follows the relationship of Jason (Allen Payne) and Lyric (Jada Pinkett Smith) as he navigates love whilst his criminal brother, Joshua (Bokeem Woodbine) navigates crime. The brothers love one another, but a traumatic event that occurred in their childhood continued to influence their lives as they grew into adults. The plot follows both the robbery of Joshua and the love story of Jason. The film shows a genuine, warm and passionate relationship between Jason and Lyric and Jason begins to envision a better future for himself while being forced to confront the trauma in his life.

You can stream Jason’s Lyric on Apple TV

Brown Sugar is an early noughties romantic comedy starring Sanaa Lathan (Sydney) and Taye Diggs (Dre). The film is a story of lifelong friends who are working hard and tirelessly in their professional jobs. Sydney is a music magazine editor and Dre is a hip-hop producer. The two focus on their careers and explore other relationships, before realising they were always meant for each other, a classic love story.

Arguably the blueprint, when it comes to Black Love films, Love Jones (1997) is a love story following the relationship of Nina (Nia Long) and Darius (Larenz Tate), two professionals who happen to meet at an upscale club, inspired by cool jazz and poetry slams. Their relationship develops as a rocky one, and Darius discovers that Nina is on ‘the rebound’ from her last relationship, which Nina eventually returns to New York for. The couple separate and begin seeing new people…and Nina starts dating Darius’ best friend! Re-watch to see how these passionate, but toxic love birds make it back to each other.

Eddie Murphy stars as Marcus Graham, a top executive in a cosmetics company who tirelessly and relentlessly pursues women. The 1992 romantic comedy film follows Graham who dates and dumps multiple women until the tables turn, and he meets his match with his new female boss Jacqueline (Robin Givens) who successfully puts him in his place. This came right on time before he met his new love interest, Angela (Halle Barry). The supporting actors include Eartha Kitt and Grace Jones. This is a classic Eddie Murphy film where maker meets his match.

You can stream Boomerang for free with an Amazon Prime subscription.

The 1995 film adaptation of Terri McMillan’s classic book of the same name, Waiting to Exhale is the perfect ‘Galentines Day’ film. The film follows the story of four best friends who bond over the downfalls in their love life as they decide what they want from a man and how hard it is to find that. The women are holding their breath until they can find the right man for them. The romantic drama navigates the ladies’ relationships with men who come and go and explores Savannah’s (Whitney Houston) and Robin’s (Lela Rochon) relationship with married men. Bernadine (Angela Bassett) ends up divorced when her husband leaves her for his mistress meanwhile, Gloria (Loretta Devine) finds love with a new neighbour. Bassett is fire in this one!

A Thin Line Between Love and Hate 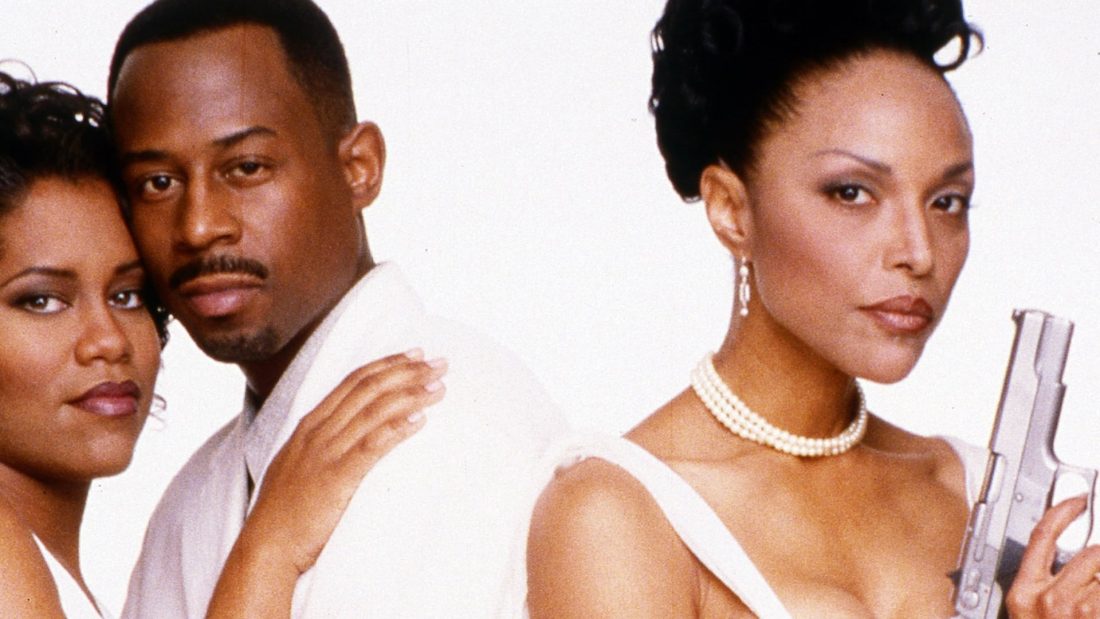 Written and directed by Martin Lawrence who also stars as the main character, this romantic 1996 comedy follows an unfaithful husband and wife dynamic of Darnell Wright (Martin Lawrence) and Mia (Regina King). The two are meant to be in a committed relationship, but ladies’ man Wright has other plans, and he can’t help himself when he meets Brandi (Lynn Whitfield). Soon realising his mistakes, Wright tries to ditch Brandi, but she just won’t let him go and strives at anything to strike revenge against Wright after he plans to ditch her.

How Stella Got Her Groove Back

The synopsis is in the title! This 1998 film follows Stella (Angela Bassett), a 40-year-old divorced hard-working mum whose personal life is lonely. Her sister urges her to find a man and her best friend Delilah (Whoopi Goldberg) decides enough is enough and flies Stella to Jamaica for some much-need R&R. There, Stella meets Winston Shakespeare (Taye Diggs) and they fall for each other, but the catch is their 20-year age gap. Shakespeare’s family do not approve of their relationship, but a heart-breaking death brings the couple closer. Shakespeare moves in with Stella and the two test their age difference in their fiery and passionate relationship.

Is your fave Black love film on this list? Tell us in the comments below…

Emily Bernard: “My ambition was to honor the glory of their everyday lives”