Scroogelicious is Theatre Peckham’s reimagining of Charles Dickens’ immortal classic A Christmas Carol, showing at the award-winning venue this December (1 – 23).

Scroogelicious, written by playwright and actor Geoffrey Aymer, is a contemporary musical-inspired stage adaptation that carries a powerful and pertinent message for the times we are now living in.

In Aymer’s modern-day adaptation, this Scrooge has transformed from an elderly miser and money lender to a young go-getting, property developer and landlord. Themes of gentrification and the growing inequalities in society foreshadow our current cost of living crisis. The iconic role of Tiny Tim is reinvented as Tyrese Crichlow, a part which will be played by Young Company members Ezekiel Ashitey (8-years-old) and Jadon Henry (11-years-old). 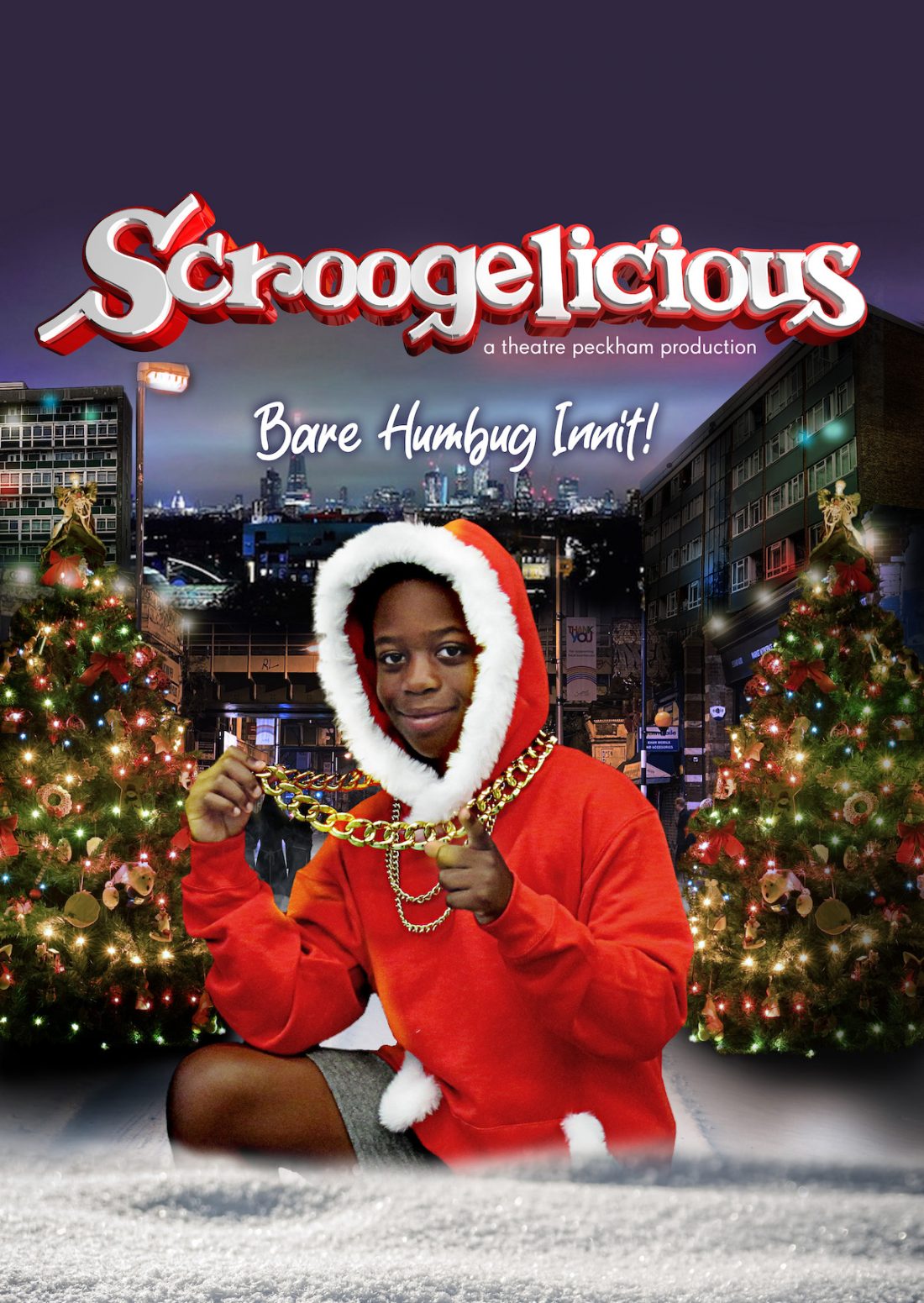 Geoffrey Aymer comments: “It feels very much as though we are living back in Dickensian times with very clear parallels to challenges that many will be facing in this country not only this coming winter but in the months or even possibly years ahead. This contemporary version, inspired by Charles Dickens’ original, carries a powerful and pertinent message but I also hope audiences will enjoy the music, mischief and merriment, and leave the auditorium uplifted and hopeful of a brighter future.”

Suzann McLean, whose leadership of Theatre Peckham was recognised just last month when she won a Black British Business Award in the Arts Senior Leader category, says: “Christmas shows at Theatre Peckham are pure joy. We celebrate new talent alongside seasoned professionals on stage together. It’s an award-winning formula that has become a firm favourite with audiences.

“Families who are also looking for a festive treat that won’t break the bank, will find Scroogelicious fits the bill for them this year.”

“Families who are also looking for a festive treat that won’t break the bank, will find Scroogelicious fits the bill for them this year.”

As is Theatre Peckham’s tradition, the annual Christmas show will be performed by an inspiring mix of professional actors and young people from their Academy, which nurtures the next generation of young performers. KM Drew Boateng, fresh from the national tour of The Colour Purple, is cast in the lead role as Ebony Scrooge, while Tomi Egbowon-Ogunjobi, whose screen credits include Netflix’s hit show Sex Education and ITV’s hotly anticipated drama Riches by Abby Ajayi, plays Scrooge’s business partner Marlene Jacobs.

The professional cast also includes Ellie Clayton in the role of Chris Prezzie. Ellie can most recently be seen in CBBC’s So Awkward; Siphiwo Mahlentle as the Original Gangsta Duppy and former Theatre Peckham member and Academy tutor Gustavo Silva playing a bunch of comedy roles.

@Melanmagazine
Storybooks? Maths books? Non-fiction books? Here is a list of five stimulating books for your little ones.… https://t.co/MFcrOnG6g4
6 hours ago
'“He worked with his community and became the iconic figure that he is today.” Throwback to when we wrote about Re… https://t.co/66rMjsprH0
13 hours ago
“Where are all the other Black travellers in the luxury sailing space?” Travel blogger Ashley Forrester probed this… https://t.co/lEUrLGTGf3
18 hours ago
“Ora Washington’s achievements laid the foundation for African American female tennis players today.” Ora Washingt… https://t.co/Qurdnyti3h
yesterday
“What’s the difference between perimenopause and menopause?” Throwback to when Dr. Zoe Williams answered question… https://t.co/3vbfDWLQ8u
yesterday
Follow