A self-proclaimed ‘London girl through and through’, Lashana Lynch is proving that she’s got a knack for securing the bag when it comes to winning high-profile roles in big budget movies.

Thirty-two-year-old Lashana Lynch rose to fame playing Maria Rambeau, a multifaceted character who’s both a former air pilot and single mother, in Marvel’s 2019 film, Captain Marvel. She’s certainly no one hit wonder. Her upcoming role as agent Nomi, who takes over Bond’s infamous 007 designation in the latest Bond film, No Time to Die sees her as a bonafide star of two of the most popular film franchises of all time.

The trailer for No Time To Die was released earlier this week, and it’s good to see Lashana join the James Bond legacy like no other 007 before her.

Here, we highlight some of Lashana’s best moments including how she’s redefined what it means to be a Bond hero, her response to the trolls, her inspirations and generally just being a gorgeous superstar.

Lashana was raised in West London, by Jamaican parents. Surprisingly it was her love of R&B, that was the driving force behind her eventually attending the ArtsEd school. Lashana told Vanity Fair “You can’t sing without acting and you can’t act without singing.”

She went on to reveal some of her favourite artists, a list which features Brandy, SWV and Boyz ll Men. That’s our kind of playlist!

“There was never a Plan B, from five years old to now, there’s never been one.”

After attending drama school, Lashana found work in theatres across London and took on odd jobs to get by. Lashana told The Hollywood Reporter: “There was never a Plan B, from five years old to now, there’s never been one.” Proving she was more than willing to put the work in to make her dream a reality.

Lashana’s first feature debut came in the form of the 2013 British film, Fast girls. However, it was her role in Captain Marvel, which earned an impressive $1.1 billion worldwide, that finally gave her the world-wide recognition that she deserved.

Yet, entering the Marvel franchise didn’t come easy to Lashana. Reportedly, she was unsuccessful in her auditions for Black Panther and Spider-Man: Homecoming. She didn’t let these setbacks stop her and stayed true to her hard work ethic and unshakeable faith in her dreams.

She likely channelled some of this emotional strength to play Maria Rambeau, the character that gave her a well-deserved breakthrough, as she describes in an interview with ENews:

“She’s able to live her best life both emotionally and physically in the movie, she is injected with power from within and can use that and pass down to her daughter.”

Lashana’s role in the upcoming Bond film, No Time to Die was announced during the thick of the #MeToo movement. It’s refreshing to see how by taking on the character of Nomi, Lashana is set to completely turn the definition of what it means to be a Bond woman on its head. Lashana told the Hollywood reporter:

“You’re given a fresh perspective on a brand-new Black woman in the Bond world. I didn’t want someone who was slick. I wanted someone who was rough around the edges and who had a past and a history and has issues with her weight and maybe questions what’s going on with her boyfriend.”

“You’re given a fresh perspective on a brand-new Black woman in the Bond world. I didn’t want someone who was slick.”

It seems once again Lashana will be bringing to our screens a much needed multifaceted and relatable representation of a Black woman. We’re here for that!

The filming of No Time to Die was also significant for Lashana who is of Jamaican descent. As the film was partly shot in Jamaica. She revealed to The Hollywood Reporter what it was like filming in Jamaica: “There’s a heat and spice that comes with Jamaica that no matter what you’re shooting, whether its drama or an action movie you can’t help but feel that.” 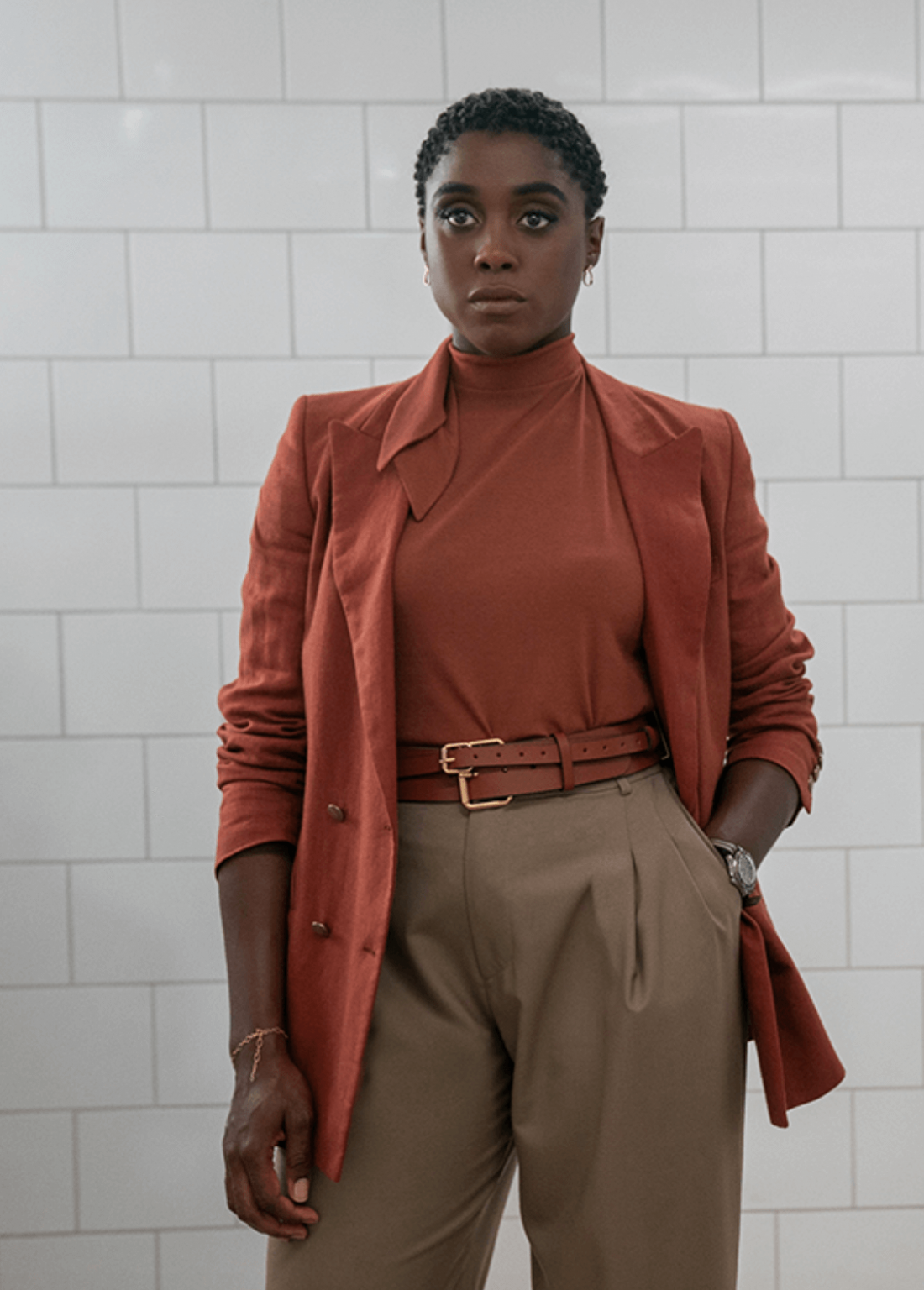 We can’t ignore the fact that not everyone was excited about the news of a Black woman taking on the 007 title. Lashana spoke to Vanity Fair about her thoughts on the online trolls:

“The good can be bad, and also sad. It’s healthy to talk about it because it reminds you, unfortunately, about where the world is right now. But also, of the work we have to do as people who have a platform to speak.”

However, Refinery29 summed up how we feel about Lashana taking on the 007 designation perfectly:

“The mission that changes everything.” A new trailer for No Time To Die – the upcoming James Bond film has been released and we can’t wait to see these two characters – Lashana Lynch, who plays Nomi, who takes over Bond’s famous 007 designation and Naomie Harris who returns as Miss Moneypenny.⠀ Bring it on! The film is released on November 12 in the UK and November 20 in the US.⠀ 📷 @universalpictures

Lashana has proven she is dedicated not only to her craft but also dedicated to bringing a new, fresh and authentic representation of a Black woman on and off the screen.

Sorry, I Didn’t Know is the comedy TV show we all need right now