Oscar-winning director Jordan Peele follows up his cult hit Get Out and sophomore offering Us with Nope, an expansive and frankly weird reimagining of the modern horror flick. Fans of Peele will know that weird is not a bad word when it comes to his art, we have come to expect nothing less.

Swapping the dark and sinister mood of his previous films for wide angled expanses of California land and sky, the film reunites Peele with Oscar winner Daniel Kaluuya who plays Otis Jr “OJ” Haywood. Together with his sister Emerald “Em” Haywood, played by Keke Palmer, the Haywoods, we find out, are the descendants of the unnamed Black jockey in Eadweard Muybridge’s The Horse in Motion, made of photographic images pieced together as far back as 1878, and which is widely recognised as the precursor to all cinema.

Horse wrangling is still the family business, and they also have a side hustle of providing stunt horses to TV and film productions. However, business is hardly booming, and a “bad miracle” that kills their father (Keith David) sees Otis Jr struggling to keep the business afloat. A series of supernatural happenings on the farm causes the siblings to realise that they are “not alone” and thus begins their quest to capture “the Oprah shot”; the irrefutable evidence of an other-worldly presence that has taken up residence above their farm.

In real life, if an alien craft was parked above your house, would your first instinct be to go grab state of the art camera and surveillance kit to capture “the Oprah shot”? Wouldn’t you be running as fast as you can to get as far away from the vicinity as possible? Thankfully, Nope is not real life and this is Peele’s world so join in as they plot and plan to capture the alien footage to sell it to the highest TV bidder and hopefully live happily ever after? As far as scary themes go it was chilling to see how one by one, every single one of the main characters submits to the urge to “capture the content”, this being their overriding instinct over and above their urge to flee to safety. Peele is clearly commenting on Society’s obsession with social media and the quest for capturing the perfect content for views.

Peele is in his element referencing Hollywood horror classics through subtle nods throughout the film. One gets the feeling that he is trying hard to make sure the film is difficult to characterise. A lazy definition would suggest it is simply a horror film but Nope also has flavours of sci-fi, noir, heck it was also great to see a Black man on a horse, wrangling a la western style. 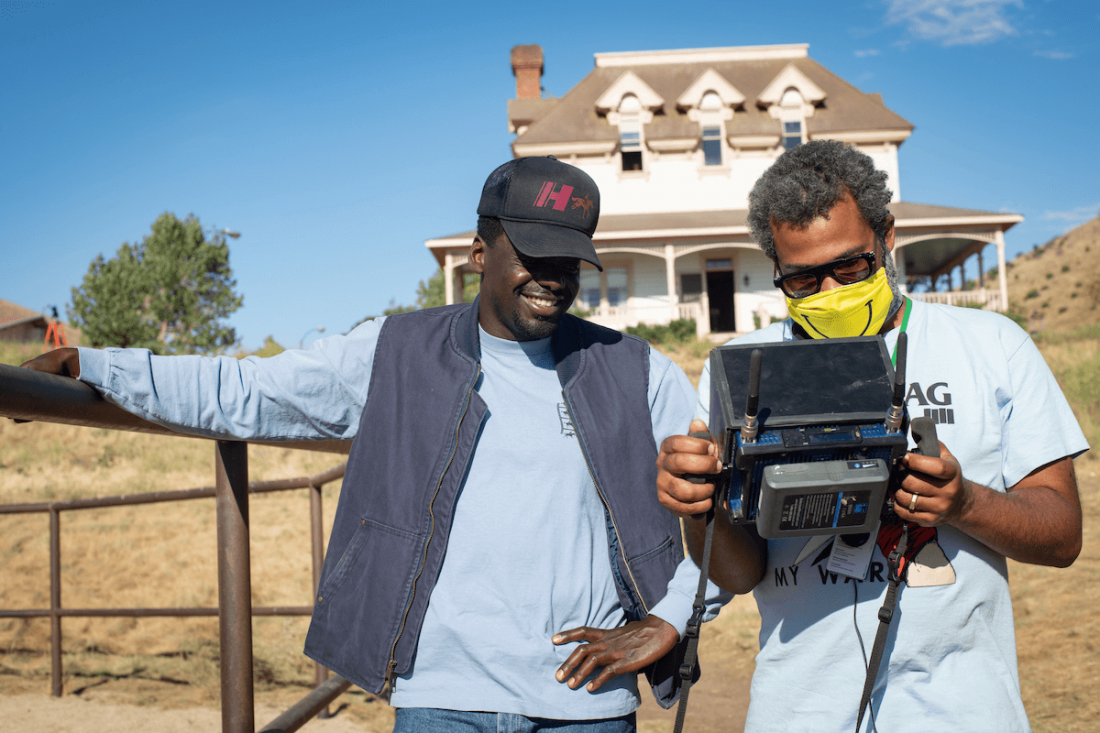 Like all good modern horror flicks, there are several laugh out loud moments, Otis Jr is all of us when faced with a furious, unearthly alien out for destruction, he carefully central locks the car he is seeking refuge in for extra safety! Both Kaluuya and Palmer have unforced natural comic timing and the film allows them to showcase this beautifully, as well as a sibling rivalry chemistry.

Also getting his share of laughs is Brandon Perea who played Angel, the nosy camera sales guy/ technician who latched onto the sibling duo. He nailed his role as the light and suitably dozy guy that you want to root for.

One of the most disturbing aspects of the film was the storyline around theme-park owner Steven Yeun’s character Ricky “Jupe” Park. As a child, Jupe starred in a sitcom, but his storyline takes the warnings of not working with animals to the nth degree. His flashbacks provided some of the most gruesome scenes in the film. No spoiler, but you’ll probably have a renewed respect, and fear of his type.

It won’t come as a surprise that we feel our girl Keke was the standout star of the film. Full of fire and fight, Keke played the role to perfection. It’s the versatility for us.

Keke played the role to perfection. It’s the versatility for us.

Two hours and 10 minutes later, you’ll probably feel like you’ve watched a classic in the making but will likely leave the cinema grappling with a thousand questions about the meaning of the film. What is the symbolism of the UFO, where did it come from and why is the film called ‘Nope’ anyway?

This author whimsically thinks that Peele is sending a subtle message with the titles of his films. Listed chronologically, they read as: “Get Out, Us? Nope!” Perhaps a stretch, perhaps not. Either to aliens or to racist establishments, we like the idea that Peele is giving both, a two finger salute!