On 7 April 2022, Judge Ketanji Brown Jackson became the first Black woman in US history to serve on the US Supreme Court.

Jackson earned narrow – but notable – bipartisan support to become the 116th justice of the US Supreme Court. The vote was 53 to 47, with all Democrats in favor after weeks of private meetings and days of public testimony. Democrats, and the handful of Republicans who supported her, praised her qualifications and demeanor, and in particular the restraint she showed during some stinging exchanges with conservative senators.

In February, President Joe Biden pledged to nominate Jackson to the US Supreme Court, fulfilling his presidential campaign promise to nominate a Black woman to the court and in the intervening months, many have cited how highly qualified and accomplished she is. As a judge, Jackson has a stellar record and proven history of public service to the nation’s highest court. Judge Jackson’s dedication to fighting for human and civil rights and her deep commitment to equal justice make her eminently qualified to serve as a Supreme Court justice.

Unbought & Unbossed: 10 things you should know about Shirley Chisholm

In celebration of this milestone, Melan Magazine shares 13 facts about Judge Ketanji Brown Jackson to learn more about this phenomenal woman.

She becomes the first Black woman to serve as a justice on the high court in its more than 200-year history!

Only two other Black justices have served on the US Supreme Court and both of them were men – Thurgood Marshall and Clarence Thomas.

Her name, Ketanji was picked by her parents after her aunt, who was based in West Africa with the Peace Corps at the time of her birth, sent them a list of African girls’ names. They chose ‘Ketanji Onyika,’ which means “Lovely One.”

At the Supreme Court, she regularly worked 14 to 16 hour days. “I feel so lucky to have had the chance to work inside an institution that has such a significant impact on the lives of Americans and that few people even get to see, much less to be part of,” she said in 2017.

6 Things we want Michelle Obama to reveal in her new memoir, Becoming

Jackson served as a poll monitor for the Obama campaign with Lawyers for Change during the primary and general elections in 2008. 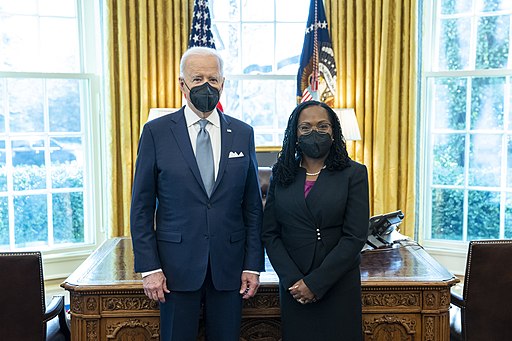 She was confirmed to the U.S. Court of Appeals for the D.C. Circuit in 2021 after being nominated by Biden. Republicans Lindsey Graham, Susan Collins and Lisa Murkowski voted with Democrats to confirm her. “I think I try to be somewhat consistent here. I think she’s qualified for the job. She has a different philosophy than I do,” said Graham, previously the Senate Judiciary Committee chair.

She is a graduate of Harvard and Harvard Law School.

We stan an unapologetic Queen: 10 reasons why we heart Dawn Butler MP

Jackson served on the independent US sentencing commission, an agency that develops sentencing guidelines, before becoming a federal judge.

She married Patrick Graves Jackson in 1996 and they have two daughters Leila and Talia.

While it’s not clear when she decided to start wearing her hair in “Sister Locs”, Jackson’s visibility as a Supreme Court judge is an inspiration to young Black girls and women everywhere, sending a powerful statement about the right to wear natural hair in the most professional of spaces.

This article was written by Derrick Mutamba