With his unique appreciation of Black history and cultural icons, we asked Patrick Adom, founder of Very Puzzled, to share with Melan Magazine, his list of inspirational women who have had the most impact on his life. 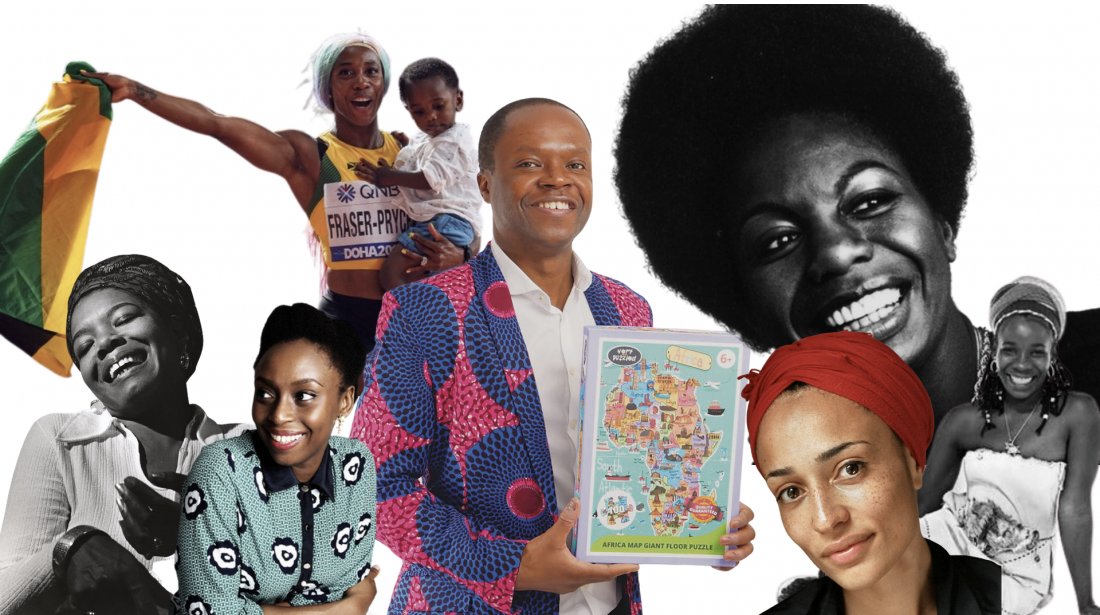 Melan celebrates the achievements of women all year round, but March is the month to particularly highlight the women who inspire us. We celebrated International Women’s Day this month, by highlighting 10 women who #choosetochallenge and have made boss moves. March is also Women’s History Month, a time to highlight the contributions of women in all fields of history, culture and society; both historical and contemporary.

Since launching Very Puzzled in 2018, Patrick Adom’s unique puzzles, which are stocked widely, including in John Lewis & Partners, continuously allow children to explore the richness of Black culture and influential people from Africa and the Caribbean.

As well as beautifully illustrating his puzzles with monuments and landmarks, Patrick highlights a number of notable figures in his products including a selection of powerhouse women such as Safi Faye and Floella Benjamin.

Clearly a champion of diversity and equal representation, we spoke to Patrick during Women’s History Month and he echoed our view that women should be “celebrated or appreciated all year round.”

We asked Patrick to list the women who inspired him the most in life and why, and he gave a lovely tribute.

All the women in my family

“I don’t know if that’s cheating a bit, obviously I guess I have to say that maybe I’m a mummy’s boy. When I was born, my mum left me when I was two or three. She moved to the UK, so she left me with my Great Aunt and my Grandmother. I can never pay them back for the love, looking after me and nurturing me at a young formative age. Especially my Grandmother and my two Great Aunts who are still alive. I cherish them a lot, they mean a lot to me.

Some people might look at it and think, ‘oh maybe that’s a bit of a hard luck story’, not having a mum with you, but the way they treated me, I felt like I was the emperor. I could do no wrong, no one laid a hand on me. I could be cheeky and they kind of put up with it, and I have my daughter now and she’s cheeky all the time. I shake my head and think, ‘how did they put up with me?’

I also had an Aunt through marriage and she’s really supportive. When I was a teenager, she taught me how to research and she was a mentor in a way, kind of gave me confidence and boosted my self-esteem. Sometimes you can fall into stereotypes or not really push yourself, but I think she pulled me to the side and gave me prep talks and that was really encouraging and really helpful. I really owe her a lot and I appreciate her.

Another woman that inspires me is my daughter, she’s not a woman…yet, but she really inspires me. I just see how she’s matured and how she’s grown. She’s only nine now, but it’s just amazing. Sometimes I look and I’m like declining almost, I’ve maybe hit my peak, because you know not so long ago, I would sit her on my lap and read her stories to her. Now she’s reading her own chapter books. I’m just like ‘yeah, ok, kind of outgrowing me now.’ I can see the logic sometimes when she’s thinking and how she’s working stuff out and how she’s growing and maturing. Having confidence in herself and believing in herself, and it just amazes me the stuff she picks up and how she can process things, and how she can question stuff. Sometimes ‘look just stop questioning and get on with it.’ She definitely inspires me and gives me a sense of purpose, drive and direction in my life and gives me focus.”

“Outside of my own immediate family and the people that I know, Maya Angelou. She’s a great author and really wise. Her persona and everything, the way she carried herself in a really difficult, challenging time. How she dealt with adversity in her life as a young child and how she overcame that and became the woman that we all know and love. Definitely Maya Angelou.”

“In a similar vein you have Nina Simone. With her music, I always love artists that come and try to champion social causes or try and use their platform to advocate for everyone else and try to push things forward even when it’s not the easy thing to do. It’s good have them type of people.”

“I’ve got a massive crush on her. I’m like a stan, I read Half of a Yellow Sun and I was just blown away, I was like ‘wow’. I couldn’t read another book for a little while after that, it was still going on in my head. It [Half of a Yellow Sun] really came to life. I’ve read a few of her other books like Americana. I really like her writing. She’s definitely a woman I admire, and I’m inspired by.”

“I think with her [Zadie], her books are really, really captivating. Again, I read NW and just from the first sentence, I loved it already. I’ve read one more of her books, I tend to like creative people. I tend to get inspired by people that can be creative.”

The women I work with in business

“I would say 90 percent of the businesses I work with are women-owned. There are people like Samantha Williams at This is Book Love, then there’s Anita Thorpe at Diverse Gifts in Brixton. There’s also Charmaine Simpson at Black History Studies. They’ve been really, really wonderful to me and supportive, stocking my products when I initially started, when it wasn’t proven or guaranteed to sell. They’ve been incredibly supportive, giving me feedback. I’m really inspired by them because I’m finding it really hard now. With the business at first it was fun, and it was kind of easy and it was just exciting, now it’s like ‘oh crap’, there’s work upon work each day. This is something that they’ve been doing for many years, and they continue to do. It’s great if we support them, because it’s easy for us just to go on Amazon and get something delivered the next day, or even the same day, but actually these are real people, trying to make a living, families to support, and that really inspires me.

They’re really putting their necks out there and championing the cause and speaking up when there’s issues in society more than I do.

Throughout my business, I tend to get the most success when I work with women it seems. Whether it’s the illustrators that I work with, or whether it’s the companies that I’m trying to get stocked in, I feel the energies a lot different.”

“I think Beyoncé is great, that might seem a bit left field, and I think she has her doubters and her naysayers. I think Beyoncé stuck her neck out with Lemonade and some of the other things she’s done. She’s multimillion. There’s a funny parody on I think Saturday Night Live that said ‘White people realised Beyonce was Black when she made certain statements or did videos’, and she didn’t have to do that, right? She was making good money and she could have really jeopardised her career, so I think it was brave for her. I really applaud her, with three children, a successful mum, businesswoman, wife and everything. I think you’ve got to give it up to her. Keeping it together with all that around you, it’s not easy. She’s an icon, something people can aspire to. I think I definitely have to give her, her plaudits.”

“I think it’s hard being that there’s so many good female role models out there. Shelley-Ann Fraser-Pryce who I have on a Jamaica map, I think she’s an outstanding athlete and now she really seems to be getting to grips with the whole parenthood thing. I think she’s a good role model for young women in terms of pursuing you career, being excellent at your craft and having a family grounding as well.”

“It’s strange because I think everybody kind of celebrates Bob Marley and quite rightly so. Rita Marley had quite a hand in his success, being there for him and being supportive. It goes to show when you have that strong partnership, or that strong foundation and you have amazing support of an amazing woman; men, people, women, whoever can achieve a lot. I think it was quite difficult for her, because he wasn’t always faithful, but she stood by him. In modern society, with Instagram and WhatsApp and all the social media pressures, I don’t know if that marriage maybe would have lasted.  I think maybe she had a different take or spirit; she was maybe more forgiving or accepting than a lot of us would be. I think she’s inspirational, raising her children, having her own career and really being supportive of her husband.”

Black women have lowest chances of having a baby through IVF: new report