The Fear-Fighter Manual: Lessons from a Professional Troublemaker is the follow-up book from New York Times bestselling author Luvvie Ajayi Jones. Melan interviews her to find out how to be a professional troublemaker! 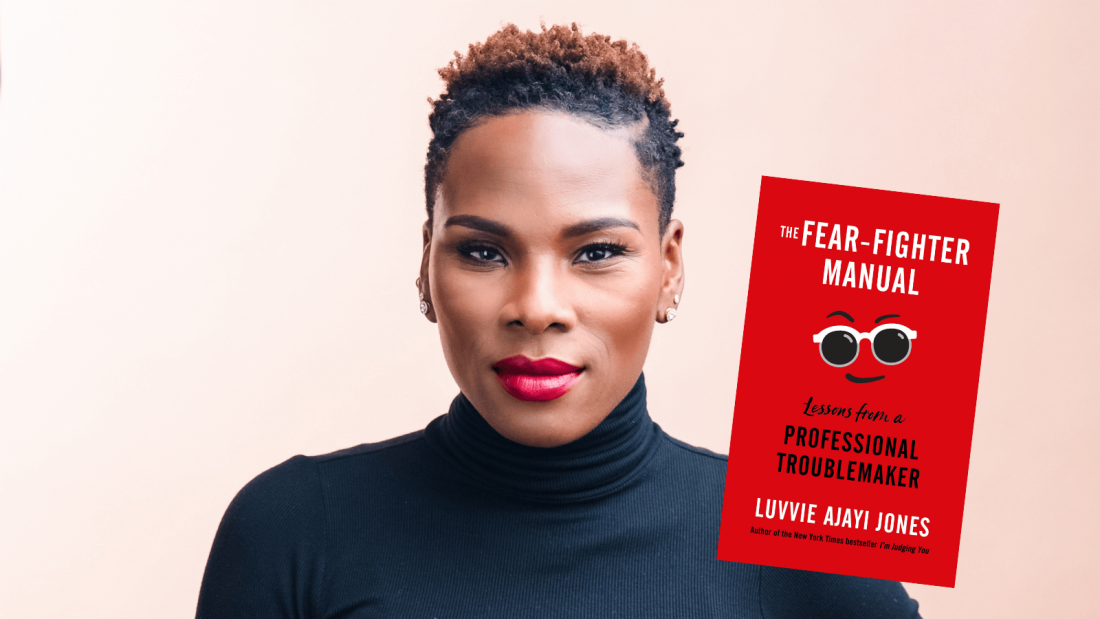 Having achieved her goal of being a New York Times bestselling author with her debut book I’m Judging You, speaker and podcast host Luvvie Ajayi Jones has followed up with The Fear-Fighter Manual, a hilarious and powerful book that talks about how to tackle fear – that everlasting hater – and live boldly and audaciously in spite of all the reasons we have to cower.

Luvvie is clearly living the life she preaches about, having created a thriving career from starting up as a successful blogger on her platform, AwesomelyLuvvie.com.

In her new book, Luvvie defines what being a ‘professional troublemaker’ is, and urges us all to be more fearless, dream big, act outside our comfort zones, be ourselves, and question the status quo in order to do truly meaningful things and create change in our lives.

We caught up with Luvvie just before her promotional book tour to learn more about how to fight fear, and other touch points in the book, why we need to set boundaries for ourselves, and the importance of having a strong network of friends around you.

In a nutshell, what is a professional troublemaker?

Trouble is underrated. I think people give it a bad name. I think [professional troublemakers] are the people who are like “Hey we gotta fix something”. They’re the ones who are challenging what’s not okay, challenging systems, they are speaking up there, taking to the streets. They’re asking questions in the rooms that they’re in. I think the world needs troublemakers otherwise everything becomes a dumpster fire like it is now.

You were a blogger for years, why did you start blogging?

I started blogging in college. I was peer pressured into doing it by my friends who were just like “Hey we’re all starting weblogs, that’s what it was called back then. This was 2003 and I just never stopped. I still have awesomelyluvvie.com which I actually started when I finished college because I deleted my undergrad blog. I started my blog to talk about the world as I see it, share my opinions about TV, film, whatever it was I felt like and yeah, I just never stopped.

Is imposter syndrome a real thing in your life?

I think for women especially, we have been basically told we’re not enough, we’re not qualified, we’re not ready. The world basically wins whenever we think that there’s something wrong with us and we spend a lot of time kind of fixing ourselves. I think we need to spend more time trying to double down on who we are, double down on why we’re dope and understand that there are people who are far less talented, skilled, gifted than us who are in the room and everyone believes they should be there just because they have this confidence. We’re the ones who actually have the gifts and the skills and the know-how and yet we are the one’s doubting ourselves constantly, so yeah do that less!

“It needs to not be extraordinary to be somebody who is authentic, who shows up in every room as who they really are, without apology.”

My favourite chapter in the book is “Be Too Much” and I love the line, “Be the youest you, that ever youed!” Can you explain what this sentiment means to you?

It’s that whole idea of doubling down on yourself on who you are. We are often told that we are too aggressive, too loud, too opinionated and we spend a lot of time internalising that and finding ways to not be that but I’m like why? That’s truly our superpower, so yeah, be extra because that’s the way that the world gets used to you. We need to normalise being ourselves. It needs to not be extraordinary to be somebody who is authentic, who shows up in every room as who they really are, without apology.

How important is it to have a support system?

I think having a support system is everything because they [your support system] will normalise your boldness. My friends normalise my authenticity because that’s how they also show up, so for us it’s not strange, it’s not extraordinary. It is how we roll and when you are around people who do that, you will have very little reason not to. Like it’s basically peer pressure, but me and my friends peer pressure each other into being ourselves, into thinking bigger into dreaming more audaciously. We are constantly bigging each other up because we won’t let each other sit in the impostor syndrome of it all. We’re constantly like ‘Yeah why wouldn’t you have this opportunity’, ‘Why wouldn’t you get this job’.

Having that support system pushes you forward. If you’re the person who is not like that you probably wouldn’t be in our space because we will offend you, we will make you feel some way because you will feel like the odd man out so a lot of me and my friends are very similar. When we’re with each other we feel at home and whoever is not like us probably wouldn’t want to hang with us because they are going to find us too much, right. I think that also brings us to the idea that we should just spend less time trying to chase behind everybody because everybody is not our people and that’s OK.

“Oh Beyoncé only has 24 hours in a day”! No, she doesn’t. Even Beyoncé will tell you that. Beyoncé has help.”

You’re big on boundaries and work structures. Why?

It’s important to put in structures because they give you boundaries and they help keep you sane.  You know you can’t keep up with everything. I can’t keep up with my emails every single day. If I did not have an assistant, for example, I would miss out on so many opportunities because my inbox is in constant shambles. I get a lot of emails every single day and all worthy of response, but I can’t do it myself.  I have an agent, I have attorneys, I have managers and some people might think it’s a lot but honestly it is our way of maintaining our sanity in this world.

People say things like “Oh Beyoncé only has 24 hours in a day”! No, she doesn’t. Even Beyoncé will tell you that. Beyoncé has help. As Black women we’re somehow told that we have to be superwoman and superwoman somehow looks like replicating time which is not possible. I’m always telling people ‘outsource yourself, outsource your time, get a team, hire people, get the help, the housekeeper to keep your house clean, without guilt. I want us to get the guilt removed from when we say that we have other people who are standing in the gap for us. We cannot be superwoman!

“I want us to get the guilt removed from when we say that we have other people who are standing in the gap for us. We cannot be superwoman!”

You have interviewed a number of high-profile people, who inspired you the most, and why?

I get something different and valuable from every single person. I’ve had great conversations with great people and there isn’t one that’s my favourite but there are those that people go, ‘Oh my god, I love that’ and one of those is Yvette Noel Schure. She’s a publicist to the stars, she’s been Beyoncé’s publicist since Beyoncé was like 15. I think the best conversations are the ones that are most vulnerable. It’s not just about how they built their careers, it’s also about how they became these people who build these careers.

I think we often see people who are visible, and we assume so many things of them, but I’m always looking to find out who they were when they were younger, what motivated them, what did they want to be before they became this person that they are now.

What haven’t you achieved on your bucket list yet?

I don’t typically make big career wants on my wish list besides being a New York Times best seller which I’ve already done. I’m always just open to what the universe has for me, doing what I love and where it takes me and what opportunities it presents to me. I kinda like that. I try not to tie myself too much to bucket list items and it has worked for me so far.

You dedicated the book to your grandmother, who passed 10 years ago. What would she say to you today, if she were here?

She would just be smiling widely and would be like “I’m so proud”. I think she would be deeply grateful to God and she would probably say all types of extra prayers. She’d be so excited, to see herself especially in the book, and would be showing the book to everybody who came to her house. She’d probably have it framed up in the house with her picture on it. Yeah. I know for a fact that she would be really proud.

Finally, any plans to come to the UK when life goes back to normal?

Yes, I was supposed to be coming to the UK before COVID shutdown everything. I would love to come to the UK and do a proper tour there when the world opens back up, definitely, I will be there.

We finished the interview with Luvvie feeling inspired and ready to put into practice her advice about how to fight fear. This book will give you the building blocks to build your self-confidence and celebrates your right to take up space wherever you find yourself.

The Fear-Fighter Manual: Lessons from a Professional Troublemaker by Luvvie Ajayi Jones is out on 2 March 2021 RRP £14.99, Quercus.

Ciara opens up about post-baby weight, self-love and self-empowerment

This is what you’ll find in professional MUA, Joy Adenuga’s makeup bag