“It was my George Floyd moment back then you see, and it still makes no sense to me.” Poet Max Cyrus narrates these powerful words in a powerful new video to launch the countdown until Stephen Lawrence Day on 22 April 2021. 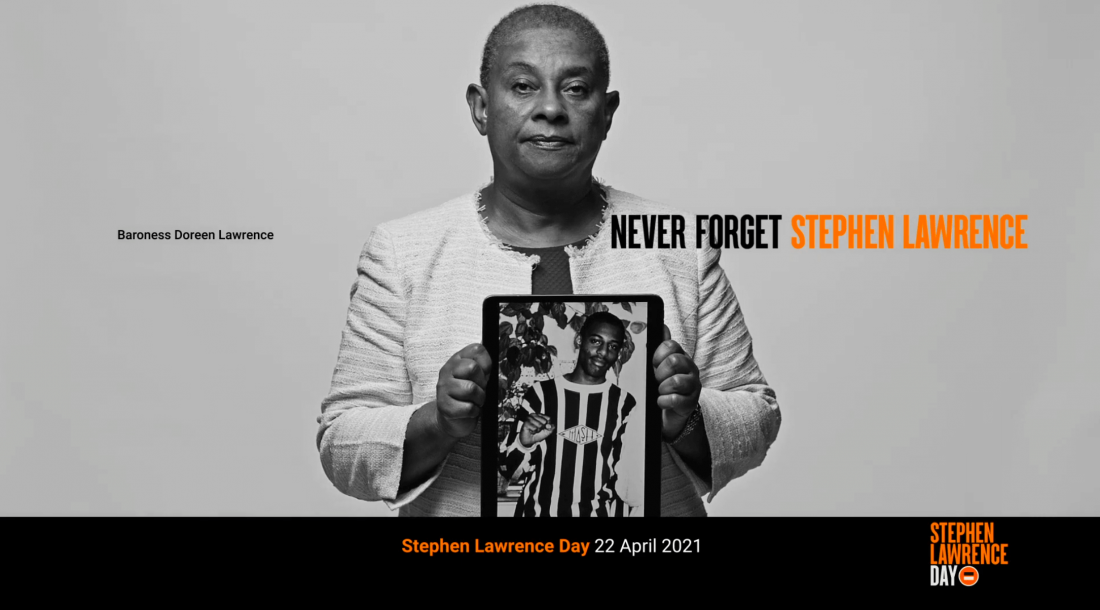 The name Stephen Lawrence is still as triggering for a generation of Black Britons, as much as George Floyd is today. The tragedy of his murder on 22 April 1993, at the age of just 18, in an unprovoked racist attack will never make sense. He didn’t know his killers and his killers didn’t know him.

After the initial police investigation, five suspects were arrested but not convicted. A public inquiry into the handling of Stephen’s case was held in 1998, leading to the publication of the Macpherson Report, which has been called ‘one of the most important moments in the modern history of criminal justice in Britain’.

Stephen’s was a life cut short. He never realised his dream of becoming an architect. To carry on his legacy, his mother, Baroness Lawrence and the newly formed Stephen Lawrence Day Foundation, have released a new three-minute film entitled Never Forget Stephen Lawrence, marking the countdown of six months to next year’s annual Steven Lawrence Day, taking place on 22 April 2021.

Max Cyrus’s monologue, interspersed by the voices of the personalities in the video is powerfully evocative and reminds us once again the promise of Stephen’s life, cut tragically short.

“Murdered by white youths at a bus stop, innocently”…

The Stephen Lawrence Day Foundation has also unveiled a new brand identity, establishing its vision to inspire a more equal, inclusive society. The organisation will do this through many laudable plans, including working with schools to offer education and business to up-skill and create job opportunities for marginalised young people in the UK.

Led by Baroness Lawrence, the foundation is currently developing resources to reach out to community organisations and schools for Stephen Lawrence Day, and will be sharing materials such as posters, social action toolkit, assembly scripts, reading lists and more toward the aim of doing their bit toward creating a society in which everyone can flourish.

“I want Stephen Lawrence Day to be a reflective learning experience, and a celebration and a journey toward greater equality and inclusion for all.”

In a statement, Baroness Lawrence said: “The events of 2020: George Floyd’s death, and the subsequent resurgence of the Black Lives Matter movement, along with societal inequalities exposed and exacerbated by COVID has made us reflect how we engage with our communities. This brought a sharp focus on what I want to be achieved in Stephen’s name.

“I want Stephen Lawrence Day to be a reflective learning experience, and a celebration and a journey toward greater equality and inclusion for all.”

Watch the short film below

Don’t sleep on these fantastic lastminute.com flights to the Canary Islands

This Women In Digital Business crowdfund campaign needs your help

@Melanmagazine
Palette is a book for the women who have, for so long, been left out of the beauty conversation. ''Palette, is a c… https://t.co/YOhir2BWG2
3 hours ago
When we talk about arthritis, many of us think it’s an illness that affects only the elderly, but the truth is that… https://t.co/Go5d4oP76a
10 hours ago
Mini Chilean blueberry cheesecakes: The sweetest treat this Valentine’s Day. This mini Chilean blueberry cheesecak… https://t.co/tNjf5mqsTI
15 hours ago
Want brighter, healthier teeth? These are the six “Health Trends” to avoid. ''Charcoal [toothpaste] may even contr… https://t.co/6Ifg9ecpjn
yesterday
Get the lowdown from this diary of a Black woman, on holiday for two weeks in Thailand. “Another day spent in the… https://t.co/6DpTTFcdio
yesterday
Follow