Did you catch the first series of Sky One’s Bulletproof starring Ashley Walters and Noel Clarke? The buddy/cop television drama, think the British version of Bad Boys, returns to UK screens on 20 March. But before that, read our interview with the two British leading men.

One thing that rides throughout the very DNA of this show is not the relentless car chases, shootouts, heists, burglaries, bent police, corruption scandals, or final showdown between good and evil – it’s PIKE and BISHOP, and their unswerving love and loyalty for each other. Yes, they fall out, take the piss out of each other, challenge each other and even attempt life without each other – but what’s refreshing to see is the rare TV depiction of two Black men and their strong, unshakable, friendship and loyalty to one another.

Another refreshing take is how two Black men from completely different backgrounds, can have the same job, but different attitude to life. They’re basically two sides of the same coin.

The first side of that coin is DI Ronnie Pike, (played by Ashley Walters, Bullet Boy, Top Boy and yes from So Solid!) He’s the stable one. Good stock, affable family, widely admired, charming, and on his way to great things in the footsteps of his commander-in-chief father. But under the veneer, a dilemma haunts Pike – like a fiendish smoker – the very thing he loves the most is going to kill him. Juxtaposed with his desire to see his daughters grow up happily, and the love he has for his supportive wife – is a desire – a compulsion – for high speed car chases, gun battles, all-nighters, undercover work – and all of this – with Bishop – who he loves as much as anything else in the world.

DI Aaron Bishop, (played by Noel Clarke, screenwriter, director Kidulthood) is the other side of the same coin. The rootless drifter. Abandoned as a child and brought up by mild-mannered foster parents, Bishop is wildly unpredictable. Full of fire and wrath and without a rudder to direct him, he is a walking time bomb. And the one person he has faith in – the one constant in his life – the only being that never dumped him – is Pike.

Find out more about the series, from its creators and stars, Noel Clarke and Ashley Walters.

Set the scene for the new series…

Noel Clarke: It’s about a year after season one. The unit has a couple of new members and Pike’s marriage is a little bit stressed because of what happened last time – the daughter was kidnapped so quite understandably his wife’s a little bit more tentative about what’s going on. They’re just going about their business and then they happen to come across some lost money at the end of a raid and it leads them down a rabbit-hole in to one of the biggest crime families in Europe. That’s essentially the story that we start delving in to.

How is Pike and Bish’s relationship? 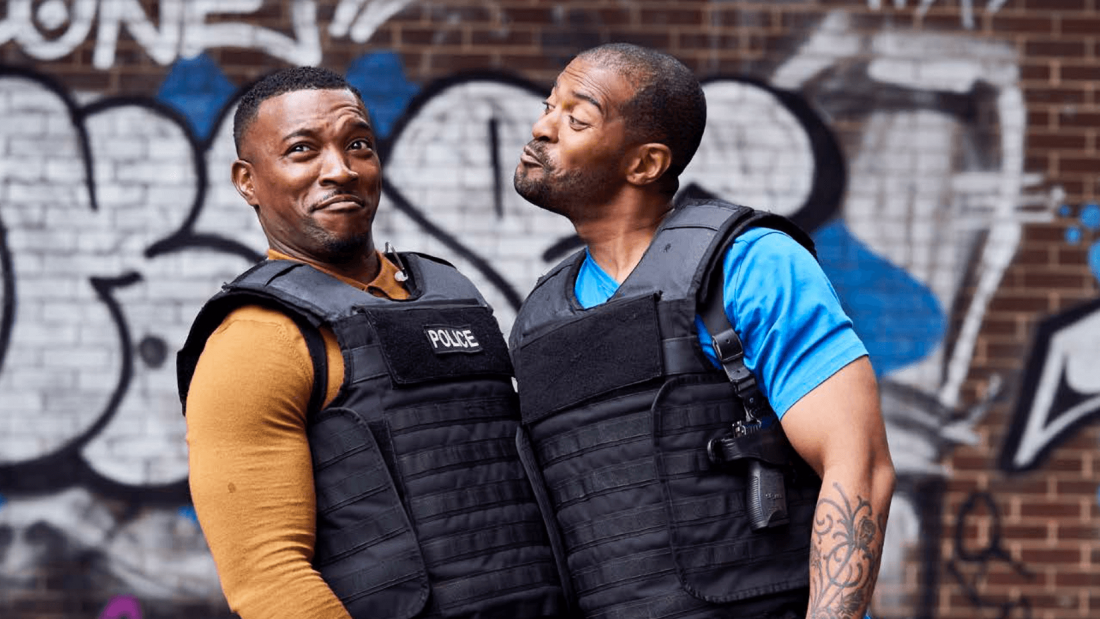 Noel: They’re still tight. The stresses with them come from the fact that obviously Pike doesn’t want to lose his marriage. But his job puts it under a strain, especially when we have to go under cover. His wife’s a little bit more resistant to that sort of work now. Where she once was supportive and would say, “Yes, go and save the world.” It’s now like, “Well, your children need you. I need you.” Bishop has no one. So, he can go deep undercover. Whereas if they go deep undercover together – which they end up doing – it pulls Pike away from his family.

You’ve filmed this series of Bulletproof  in Amsterdam. What was that for?

Ashley: It’s not a big spoiler, to be honest. Just being able to get out of the UK and experience our characters in different places and see how we fare was a good look. It was good fun.

Noel: Amsterdam was great. There’s a big car chase and you get a real sense of the city with the cars zipping down the canals and stuff like that. As we’re making the show bigger and more ambitious, it’s good to get abroad and to show these British guys over there. In the story they’re working with the Dutch police but in real life we got to work with Dutch crews. It was good for us to see that, “Okay, this is a British show but actually it can travel and it does work in other countries.”

What have been the highlights for you from filming?

Noel: Filming in Amsterdam, filming in Malta as well was good for the reason I said – just to get the characters out of London. The biggest highlight and something that is really emotional is probably the one thing I can’t tell you about. Definitely we are playing with the audience and taking them on a journey where people that they didn’t like, they’re going to end up liking. Our characters are our characters but some of the other unit members, you’re really taking them on a journey. You see a little bit more of them and then we pull the rug. It’s definitely bigger in not just the action but in the emotional arcs of a lot of the characters.

“We’re both were pretty sick of Black male representation on TV, to be fair up until this point, especially when it comes to family and how they are with their kids and whatever. It was important for us to make that family dynamic solid.”

How do you balance the comedy, action and drama in Bulletproof?

Noel: It’s interesting – in this country especially people really look at Bulletproof as an action-comedy, but I don’t. When I look at Lethal Weapon and Bad Boys, to me they are just dramas that have funny moments in them. I’ve definitely always had the American mentality of, “Well actually you can have funny moments in dark times.”

For us, it’s not really about having to balance the humour. We just say what we say. It’s observational humour. Things are just funny. Even in the dark moments, things are just funny. If people watching find it funny then it’s funny. If they don’t, they don’t and they still get an action-packed hour of drama or whatever like that. There’s another texture, there’s another tone. If they get that, then they get that.

You both write and exec produce on the show…

Ashley: …and this was my first time writing and producing! Working with Noel and Noel having the experience that he’s had producing has really helped. Watching him being involved creatively and behind the scenes spurred me on, to be fair. So, I’ve gradually got more involved as we’ve gone along once I felt like I could contribute. It’s been amazing to be able to shape the direction that the show goes and having that control over it and over your character as well. It’s a position that all actors would love to be in.

Noel: For me, being in that position is what I do. It’s what I’ve been doing for a while. If anything, I would like more control. I think it’s an important thing to be able to achieve it because like Ashley said, we came up with the show, we created it and there is a certain amount of understanding of what these characters are going through that other people will not get because we are who we are. There’s certain humour and certain things we can bring to these characters that other people might not get.

What does Bulletproof add to the cop show genre?

Ashley: We’re bringing a new audience to this genre and obviously that’s because of who we are and what we’ve done in the past. Bringing them into the fold and them enjoying it was one of our things that we said from the beginning we wanted to do – we understand that there’s this huge stigma around police, especially in our communities. Maybe in the future, somewhere along the line, there might be some kids around going, “I want to be like Bishop and Pike,” and they will end up getting into that field.

“A real married couple that are not fighting all the time and problems or whatever. Just married and dealing with real-life issues and how it would it be in this job. Kids are doing well at school. Dad’s involved in their lives and if he’s not, mum wants him to be.”

The show also offers a realistic portrayal of family life, particularly through Pike. Was that something that you were both keen on bringing in from your own experience?

Ashley: So important. We’re both married, we’re both family men. We’re both were pretty sick of Black male representation on TV, to be fair up until this point, especially when it comes to family and how they are with their kids and whatever. It was important for us to make that family dynamic solid. A real married couple that are not fighting all the time and problems or whatever. Just married and dealing with real-life issues and how it would it be in this job. Kids are doing well at school. Dad’s involved in their lives and if he’s not, mum wants him to be. I think that stuff is important. We got a lot of reactions from that from season one. I think it’s so important for us to be in this position as execs, as producers and co-creators: we need to use that voice for good. It’s not all just about action and drama and entertainment. Sometimes, it’s about changing perceptions in the media.

Watch all episodes of Bulletproof: Series 2 on Sky One from 20 March 2020.

@Melanmagazine
Experiencing Bloating or Low sex drive? Why you should be consuming more fruit & veg. https://t.co/qS3cODXnQd https://t.co/j0g9WmKSUH
8 hours ago
The truth about cancer and how to reduce the chances of getting it ''That is the beauty of the human body. It is… https://t.co/1owilhtC7i
14 hours ago
Thinking of spending time in South Africa? Here is what to see & do in Joburg & Cape Town! ''South Africa is stu… https://t.co/1wZVPLIUkC
20 hours ago
This week’s pumpkin soup recipe incorporates the warming heat of pepper and lentils into the dish.… https://t.co/SCkJ3tJy2Z
yesterday
Throwback to when Jennifer G. Robinson, Director of Women of the Lens film festival, spoke to us about what it’s li… https://t.co/kmc2ai77pw
yesterday
Follow