Only a couple of weeks’ after the release of Such A Fun Age, and author Kiley Reid must be pinching herself at the immense buzz her debut novel is having among high profile circles.

“Such a Fun Age is a fresh voice. It’s a unique, honest portrayal of what it’s like to be a Black woman in America. Kiley Reid has delivered a poignant novel that could not be more necessary.” These words are from Emmy-Award winning producer and writer Lena Waithe, who has already snapped up the film and TV rights of the book.

My heart and my novel are EXACTLY where I want them to be. All of my gratitude goes to @lenawaithe , @hillmangradnetwork , @Sightunseenpics , @putnambooks , and literally everyone at @wmebooks . Can’t believe I’m this person right now… but LINK👏IN👏BIO👏

Lena’s interest is a big deal. The unapologetic innovator uses her talent to give space to unheard stories that need to be told. From navigating the experience of coming out as a lesbian woman in the Emmy-Award winning ‘Thanksgiving’ episode of ‘Master of None’, to most recently channelling her writing and production skills on Queen & Slim. We look forward to seeing her plans with this novel.

Reid’s debut has attracted widespread praise within the literary circles and is the top choice on many a January book club list, including Well-Read Black Girl.

ICYMI: Our January book is SUCH A FUN AGE by @kileyreid! Look out for a special #WRBG weekend newsletter featuring our 20 books for 2020! ✨ repost via @politicsprose #wellreadblackgirl

Such a Fun Age tells the story of Emira, a 25-year-old Black woman trying to figure out postgraduate life. She lives in Philadelphia and gets by working as a receptionist and a babysitter for a privileged wealthy white family. The story begins to unfold when Emira receives a call from Alix late at night asking if she can babysit. Alix pleads with Emira, insisting she needs to deal with an emergency and offers to pay her double. Emira agrees and takes two-year-old Briar to an upmarket grocery store, where a security guard at the store accuses Emira of kidnapping the white child she is babysitting. This has an explosive knock-on effect and a chain of events unravel highlighting the issues of race, class and money.

“When you are looking for someone to take care of your child, you’re asking for love, but you’re only paying $16 an hour.”

Reid was born in 1984 in Los Angeles, raised in Arizona and studied acting in New York. She went on to study creative writing at the University of Arkansas and was accepted on the prestigious Iowa’s Writers’ Workshop. During her time studying, Kiley worked in the childcare sector as a children’s entertainer and a nanny.

While Such a Fun Age is not an autobiography, Kiley clearly uses her experiences to highlight poignant issues. In a recent interview with The Guardian, Kiley shared her thoughts on the issue of underpaid domestic workers vs the magnitude of emotional labour expected from them:

“When you are looking for someone to take care of your child, you’re asking for love, but you’re only paying $16 an hour.” 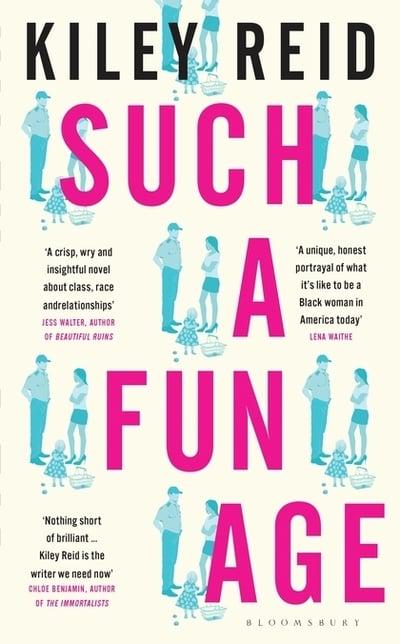 Such a Fun Age also shines a light on an issue many young women face when working as a nanny, a lack of health care. Reid highlights this issue in her novel when even after a disastrous Thanksgiving dinner spent with Alix’s family and friends, Emira feels she can’t quit her job. As she says “I turn 26 next week… I’m gonna be kicked off my parents’ health insurance.”

Reid has her own personal experience of facing this issue. She comments on the nervous feelings that came up with what should have been a simple job:

“Well we’re all human, we all have the same experience, (but) we don’t.”

“The issue of health insurance became real to me because I knew if I cut myself it was going to alter the course of my life, and I’d have to pay thousands of dollars.”

Kiley’s novel emphasises how race and class shapes so much of the world we live in. From the wrongful assumptions made of a young Black woman stepping into an upmarket grocery store with a white child, to Alix failing to see, as Reid puts it “the broken systems that put people where they are, to begin with.” Reid has created a character in the form of Alix, that many of us are familiar with, that person who blindly believes that we all experience the world in the same way. On this, Reid says:

“Well we’re all human, we all have the same experience, (but) we don’t.”

Such A Fun Age is an honest and authentic tale that tackles the issues of money, race and class in an everyday life narrative and we’re definitely here for that!