Clear turquoise waters, a tranquil, peaceful vibe and temperatures never dipping below the mid-20s while they were there, Melan Magazine editor Joy Joses was delighted with her escape to the Golden Rays Luxury Resort in the picturesque town of Primošten, Croatia for a three-day #sistercation!

When people think of a holiday to Croatia, thoughts normally drift to city breaks in Dubrovnik which holds the title of being Croatia’s most photographed city or Zagreb, the country’s capital. Chances are you’ve never even heard of Primošten, a small town situated in between the cities of Sibenik and Trogir, about 45km away from Split airport. We (my two sisters and I) were looking for a relaxing, luxury hideaway, far from the hullabaloo of crowds and fast pace of London life and we found it in the *Golden Rays Luxury Resort.

We flew from London’s Gatwick Airport via EasyJet, a journey that lasted less than three hours, perfect for a city break. We had hired a car but following a weird verbal tussle with the car hire company, who attempted to extort an additional large sum of cash for even more insurance, we decided to take a taxi instead. There were dozens of taxis lined up outside the airport and after a quick negotiation, we jumped into a clean-looking four-seater. In hindsight, this was the best decision as our driver, Mario, was absolutely lovely and ended up ferrying us around during our short trip. A quick 45 minutes of admiring the rocky white cliffs and landscapes of Croatian towns and we arrived at our accommodation, Golden Rays Luxury Resort.

Our first impression of Golden Rays was difficult to form immediately as we arrived quite late at night and it was already dark. We could barely make out much of anything, but there were some promising looking outlines of impressive villas and apartments within the large complex once we pulled up through the resort gates.

With excellent reviews on TripAdvisor, and stunning imagery on their website, our expectation for Golden Rays was extremely high. Their website declares the resort as a pioneer of luxury tourism in Dalmatia, as it’s located in a prime seafront spot with the clear waters of the Adriatic lapping at the rocky white stones of the beach front. With its seven luxury villas and eight equally stunning apartments situated on the rounded curve of the town of Primošten, guests are provided with clear views out to sea.

We had to wait until the morning to fully enjoy the spectacle of being surrounded by the Adriatic Sea, a feature facilitated by the panoramic floor to ceiling windows of our penthouse apartment. Night-time entrance notwithstanding, our first impressions of our accommodation were positive. On entering the apartment, the contrast of the dark outside expanse contrasted the softly lit cream walls and matching polished flooring of the property that flowed up the steps toward our penthouse accommodation.

The expansive open plan 134sq living space was tastefully decorated in creams, dark wood furniture and stainless steel. A feature lampshade dominated the living area and a quick scan of the kitchen and all its mod cons and utensils showed that everything was in pristine condition and spotless. So far, so good!

The two bedrooms of the penthouse includes a walk-in wet room and can easily sleep four people.

Ravenous and too tired to eat out on the first night, we ordered pizza, details of a local restaurant (portion sizes were huge!) provided by the friendly reception staff, who’d cheerfully waited up for us, even though we arrived much later than planned.

The next day we were dazzled by that view I mentioned before. Several selfies and ‘for the gram’ shots later, we explored the rest of the facilities which included a small bar area and a gorgeous looking infinity pool.

Close to the pool area is a picturesque cobbled pathway, snaking alongside the resort’s plush looking villas and their private pools, that led down to a secluded rocky beach that belongs to the resort. Due to the time of year, the resort was practically empty and so we had the beach to ourselves. We treated ourselves to several (brief) dips in the very cool sea, we couldn’t believe how clean and translucent the water was. On that beach we were finally able to relax and enjoy the peace and tranquillity that softly lapping water and a beautiful climate can evoke.

What to do locally?

The resort is situated in the old town of Primošten. We were told that about 500 years ago, the locals connected the island to the mainland in order to reach their fields more easily. In fact, the town’s name originates from this detail, it’s from a Dalmatian term ‘primostiti’, which means to bridge. Primošten is also surrounded by seven other small islands.

We were reliably informed that there were a few good restaurants in the main town of Primošten, and on one occasion we decided to venture into the town for some sightseeing. The town could be reached after a 20-minute walk or a short taxi ride away, but with temperatures of 32 degrees at high noon, we decided to opt for the taxi there and walked back.

We enjoyed visiting the local Church on a hill, souvenir shops and the town’s charming, pristine beach, that wouldn’t look out of place in the Caribbean.

What to do a bit further away?

The resort offers guests a number of excursions and activities. We were tempted by the half day excursion to explore the National Park in Croatia, Krka Waterfalls. Other guests staying at the resort told us that it was stunning. In the end though we organised our own excursion, a 10-hour five-island tour.

We were pondering the wisdom of this decision through the sounds of our phone alarms to wake us up for the extremely early morning start! But any doubts soon vanished when we were picked up by Mario who drove us into Split, where the excursion began. We boarded the speed boat, which seated about 15 passengers. We felt secure, even though the boat was flitting through the waves at high speeds, because we had to sit astride the seat, kind of like on a horse, and had sturdy looking life belts on.

The five islands we passed through were Bisevo (where the Blue Cave is situated), Vis, Budikovac (which has an amazing Blue Lagoon) Hvar and Komize Port. There were plenty of opportunities to explore the islands and swim throughout the day. Highlights of the day were visiting the island of Hvar, which we’d heard so much about and possibly due to eating the most amazing lunch, which was heavily discounted for passengers of our boat. But by far the best experience was visiting the Blue Cave. Having read that it is one of THE top things to do in Croatia, we had already built it up in our heads, but the actual experience was even better. The Blue Cave is an eerie, ethereal, other worldly phenomenon that must be experienced. We bandy about the term natural wonder all too easily nowadays, but this one definitely earned that title. An exhausting but wonderful day.

The rest of our stay was spent chilling within the confines of the resort. It was the perfect setting to relax and gossip with my sisters, cook lazy breakfasts, catch up on some reading and just generally unwind. We’ve already pledged that we’ll be returning in the not to distant future. 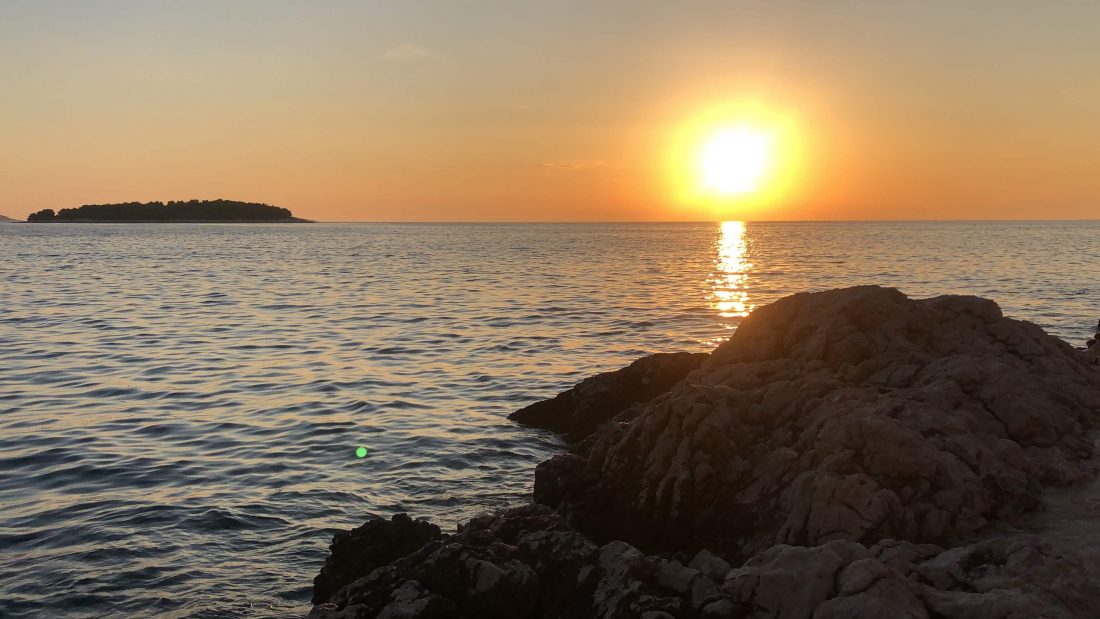 *For an exclusive 15% discount for all direct bookings with Golden Rays Luxury Resort until 28 February 2020, and 10% off after that for the rest of 2020, simply use the code GoldenMelanMag15.

Watch a video of our #Sistercation

What this TV presenter did next: five-minute chat with Scarlette Douglas