On the day Toni Braxton, one of the world’s biggest R&B icons, graces a UK stage for a one night only tour for the first time in two decades, there was no way we were going to miss it. Melan contributor, Cherie Williams is still on a high from an incredible night.

Braxton was certainly in the building last night Saturday 16 November 2019. The multiple Grammy award-winning singer, one of the highest selling female R&B artists in history, set the stage on fire in her one night only show at Eventim Apollo in Hammersmith, London.

It’s been 22 years since Braxton performed in the UK – yes it has been that long! Before Braxton took to the stage, we were reminded of her huge catalogue of hits via a series of video clips and images from her most popular hits, it was great seeing ‘the famous pixie haircut’ again.

“Overall, it was a wonderful trip down memory lane and I’m so pleased I was there. It was great to see Braxton in top form”

Before long, Braxton appeared on stage in a suit, matched by her male dancers, to screams, cheers, and even some tears from her ecstatic fans! The crowd was, as the young ones say – LIT! The lights from all the mobile phones in the room looked like a sea of candles. There was no mistaking that this was the return of one of our most adored divas! 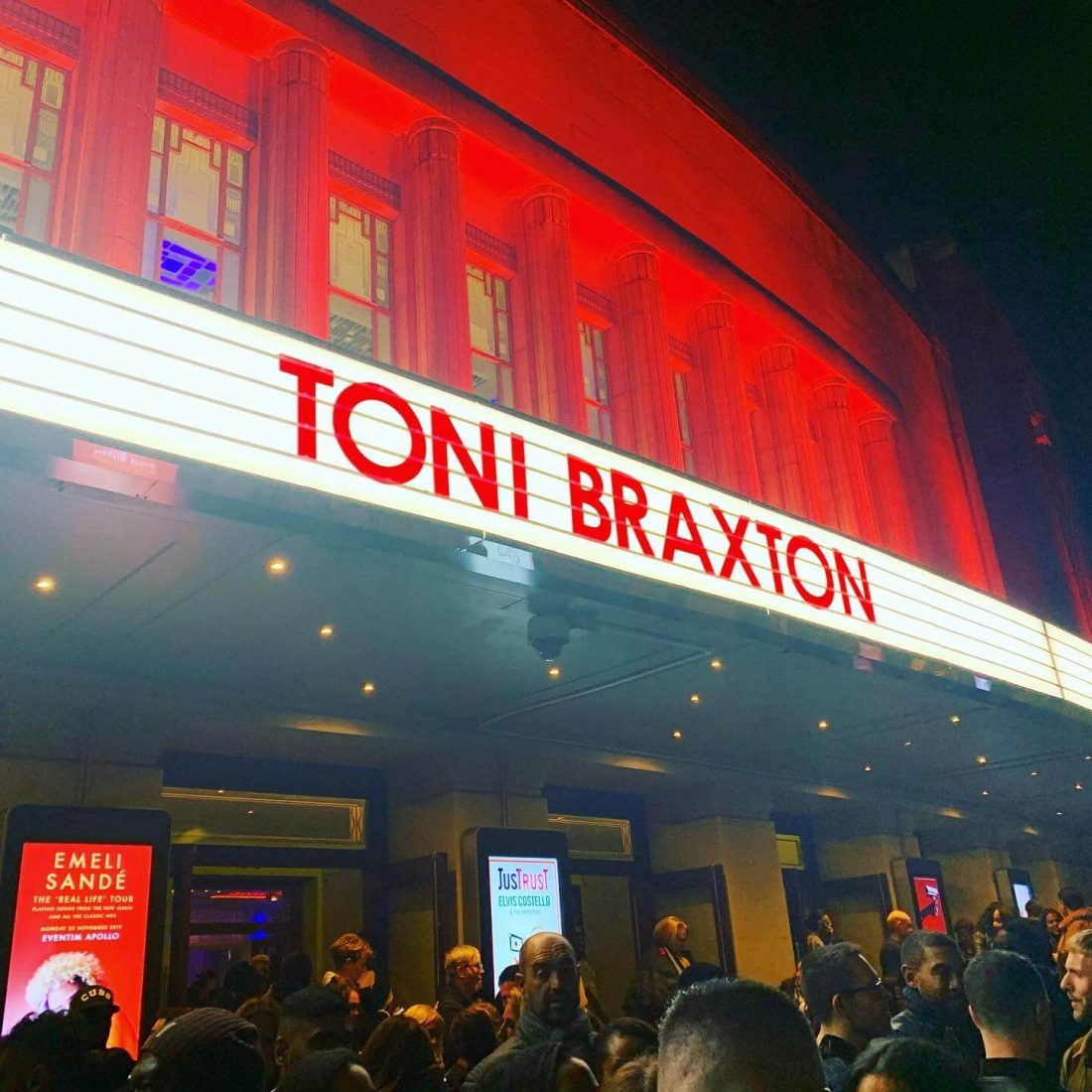 It wasn’t long before the suit came off and Braxton entranced the crowds in a stunning beaded white outfit. Shout out to the wardrobe department, there were just two outfit changes, but they were both fabulous!

For the next hour and 20 mins we were taken down memory lane and treated to hit after hit as Braxton belted out He Wasn’t Man Enough For Me, You’re Making Me High, Breathe Again, How Could An Angel Break My Heart …… plus many more and her most recent release, Long As I Live, also the name of her tour.

A highlight of the show was the many instances where Braxton enthusiastically interacted with the audience, and we loved it. At one point, Braxton jumped off the stage into the throng of people nearest the stage. Unfortunately, I was too far back to catch a glimpse of her. Fans were also invited to go on to the stage, and a very enthusiastic man was given the opportunity to sing Babyface’s part of the classic hit Hurt You; he was fab and no doubt it will be all over YouTube very soon.

One lucky couple were also serenaded by Braxton and the crowd learnt that their relationship was only six months young; they seemed lost for words when Braxton knowingly asked them: “what do you do to keep the fire alive?” to laughter from the audience.

Overall, it was a wonderful trip down memory lane and I’m so pleased I was there. It was great to see Braxton in top form despite her ongoing health issues, performing in her own inimitable style. Her voice was truly amazing and there was fantastic crowd engagement, I’d easily give Braxton a 10/10 for an awesome show!

Let’s hope she doesn’t leave it too long before her next UK show.

Watch the Long As I Live video below: Real music lovers will appreciate it!