Social media app Snapchat recently came under fire when one of its tasteless adverts made a joke out of singer Rihanna’s previous relationship with Chris Brown. It brought to light many relevant problems around Domestic Violence and how it is often a subject of throwaway jokes in society.

The singer and influencer spoke out on Instagram talking about why those kinds of jokes are never okay. Here’s what went on and why Domestic Violence should never be a ‘joke’ and how it affects the lives of so many people in the UK.

In an advertising poll attempting to engage its audience, Snapchat’s “Would You Rather” poll invited users to vote if they would rather “Slap Rihanna” or “Punch Chris Brown.” 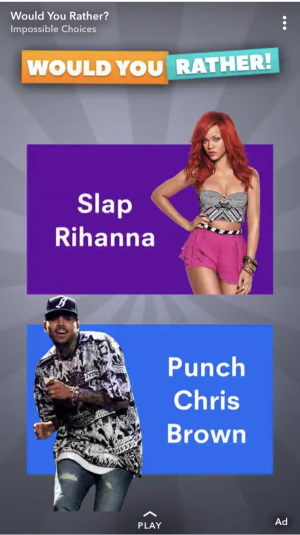 Naturally, Rihanna took to social media to criticise the stupidity of the app and since then, Snapchat deleted the post.

As a result, the company’s share value dropped by 3.64 percent, the equivalent of roughly $754 million – a significant decline thanks to this post from Rihanna: 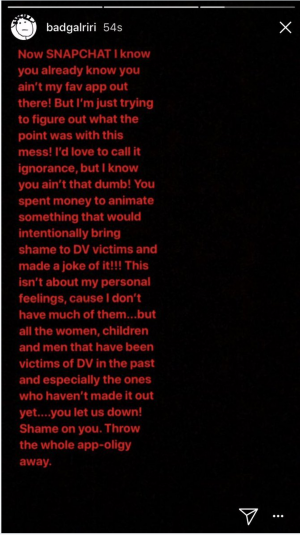 “…I’m just trying to figure out what the point was with this mess! I’d love to call it ignorance, but I know you ain’t that dumb! You spent money to animate something that would intentionally bring shame to DV [domestic violence] victims and made a joke of it!!! This isn’t about my personal feelings, cause I don’t have much of them…but all the women, children and men that have been victims of DV in the past and especially the ones who haven’t made it out yet…you let us down! Shame on you.”

Domestic Violence is never a joke

According to the ONS, an estimated 1.9 million adults aged 16 to 59 years experienced domestic abuse in the last year, according to the year ending March 2017 Crime Survey for England and Wales (1.2 million women, 713,000 men).

The reason it is such a danger to people is because it’s often a hidden crime not reported to the police. People who are victimised by domestic violence are often physically and emotionally manipulated by their partner which makes it hard for them to leave. Therefore the estimated number of victims is always higher than the number of incidents reported by the police.

How to recognise DV in a relationship

Even when it’s your own relationship, it’s sometimes difficult to spot domestic violence. We’ve highlighted these tell-tale signs from Women’s Aid on how you can recognise abuse and what you can do about it.

If you or a loved one is suffering from domestic violence, visit the NDV Helpline