Hotly anticipated titles from Candice Carty-Williams, Akwaeke Emezi and Lizzie Damilola Blackburn are among our roundup of books coming out in the next few months that we recommend for your pre-order list. 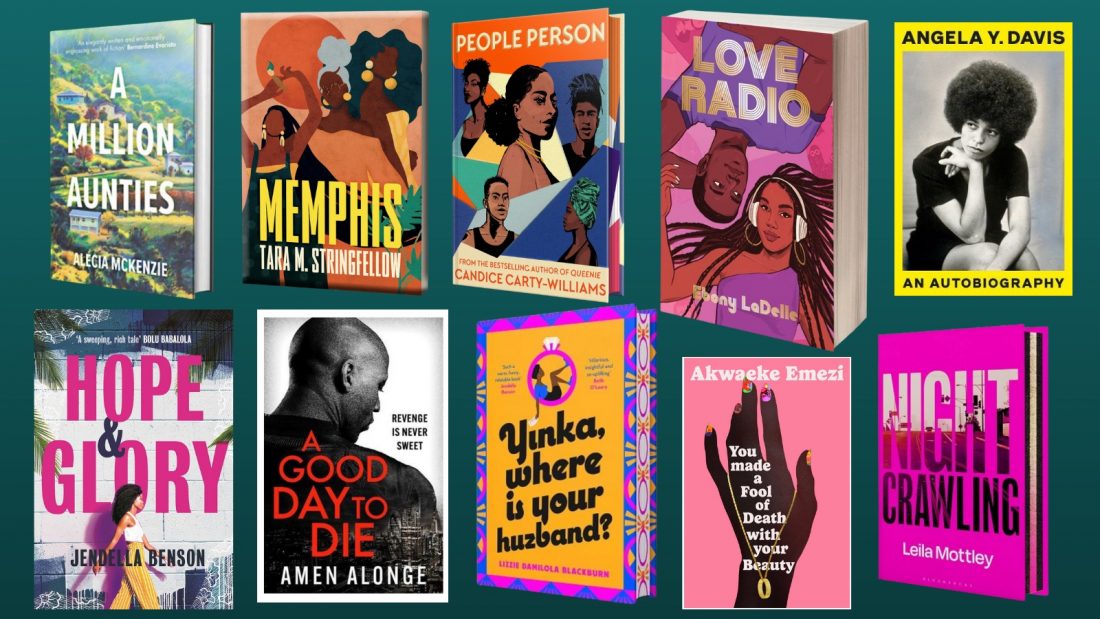 The author of the popular and bestselling Queenie returns with another sure-fire book. Meet Dimple Pennington. She’s thirty, and her life isn’t really going anywhere. An aspiring lifestyle influencer with a terrible and wayward boyfriend, Dimple’s life has shrunk to the size of a phone screen. And despite a small but loyal following, she’s never felt more alone in her life. That is, until a dramatic event brings her half siblings Nikisha, Danny, Lizzie and Prynce crashing back into her life. And when they’re all forced to reconnect with Cyril Pennington, the absent father they never really knew, things get even more complicated.

Love Radio is a captivating love letter to Black literature and music with a heart melting love story at its heart. When it comes to love, Prince Jones is the guy with all the answers, or so it seems. But Dani Ford isn’t checking for anybody. She’s focused on her plan: ace senior year, go to college, move to NYC and become an author. When they meet sparks fly, but Dani isn’t looking to get derailed. She gives Prince just three dates to convince her that he’s worth falling for. Three dates for the love expert to take his own advice and just maybe change two lives forever.

Yinka, Where is Your Huzband? By Lizzie Damilola Blackburn

Author of Yinka, Where is Your Huzband? Lizzie Damilola Blackburn set out to write the story that she and her friends have longed for but never seen – romcoms ‘where Cinderella is Black and no-one bats an eyelid’.

Yinka wants to find love. The problem is, she also has a mum who thinks she’s better qualified to find it for her. She also has too many aunties who frequently pray for her delivery from singledom, a preference for chicken and chips over traditional Nigerian food, and a bum she’s sure is far too small as a result. Oh, and the fact that she’s a 31-year-old South Londoner who doesn’t believe in sex before marriage is a bit of an obstacle too… When her cousin gets engaged, Yinka commences Operation Find A Date for Rachel’s Wedding. Will Yinka find herself a huzband? And what if the thing she really needs is to find herself?

Nightcrawling is the story of Kiara, trying to hold an idea of family together with her father dead, her mother in rehab and a brother, Marcus, chasing dreams in the music business, while the rent collector’s at the door.  Forced to walk the streets at night, then taking a step of faith into the witness box, in her care for the nine-year-old neighbour, Trevor, her friendship with Alé and the love she has for Marcus – with all his failings – we see Kiara’s vulnerability, her resilience, her pursuit of joy and hope and a different kind of future.

Nightcrawling is inspired by real events in Oakland California (Leila Mottley’s hometown) where a 17-year-old black woman took the stand as a witness against a police cover up, Leila has spoken about wanting to give a voice to the untold and hidden stories of young women not only in the States but the world over.

From the author of The Death of Vivek Oji and Freshwater comes another book rich in psychological insight and exquisitely crafted prose.

It’s the opportunity of a lifetime: Feyi is about to be given the chance to escape the City’s blistering heat for a dream island holiday: poolside cocktails, beach sunsets, and elaborate meals. And as the sun goes down on her old life our heroine also might just be ready to open her heart to someone new. The only problem is, she’s falling for the one man she absolutely can’t have.

A Good Day To Die by Amen Alonge

Amen Alonge’s A Good Day To Die is a contemporary thriller set in London that primarily takes place in one day. The initially nameless protagonist – we later learn he is known only as Pretty Boy – returns to London after a decade away. But he’s back. No one knows why, but it’s clear that revenge is on his mind: he is determined to make the person responsible for his exile from the London underworld scene pay at last. But his plans seem to be derailed when he takes possession of a bracelet, unaware that its original owner has set a high price for its safe return. The hunter becomes the hunted… and Pretty Boy will have to find out if it is indeed a ‘good day to die’.

In A Good Day To Die the action never stops, the body count is high, but there’s also a lot of great humour. Amen Alonge’s debut book is a refreshing new addition to the world of British thriller publishing, with a feel of the US cult series The Wire.

A Million Aunties by Alecia McKenzie

Described by Bernardine Evaristo as “An elegantly written and emotionally engrossing work of fiction”, A Million Aunties follows American-born artist Chris who, after a personal tragedy upends his world, travels to his mother’s homeland Jamaica to find peace. He expects to spend his time painting in solitude, coming to terms with his loss and the fractured relationship with his father. Instead, he discovers a new extended and complicated “family” with their own startling stories. The people he meets help him to heal and he supports them in unexpected ways, through his art.

Told from different points of view, this compelling novel about unlikely love, friendship, and community, with several surprises along the way, takes place against the backdrop of rural Jamaica, New York City, and Paris.

An Autobiography by Angela Y. Davis

In An Autobiography, Angela Davis describes her journey from a childhood on Dynamite Hill in Birmingham, Alabama, to one of the most significant trials of the century: from her political activism in a New York high school to her work with the US Communist Party, the Black Panther Party, and the Soledad Brothers; and from the faculty of the Philosophy Department at UCLA to the FBI’s list of the Ten Most Wanted Fugitives.

Told with warmth, brilliance, humour and conviction, this is an unforgettable and page-turning account of a life committed to radical change.

This book is a re-issue with a new introduction by Davis that resonates just as powerfully today.

The debut book from Tara M. Stringfellow, Memphis is a stunning Black fairy tale that follows the story of Hazel, Miriam, August and Joan; three generations of women in a southern family. A mesmerising debut that celebrates Black female joy, grace, humour and grit, it is also an ode to the music, magic and mystery of the city itself.

Woven from Tara’s personal family history – her grandfather’s role as the first Black homicide officer in Memphis, and his subsequent murder at the hands of his own squad; her grandmother’s activism and memories of Martin Luther King – poetry and stories are in Tara’s soul and this family folklore; a legacy passed down from mother to daughter, show how art, love and community, have the universal power to transcend.

The first book from Jendella Benson has already attracted excellent reviews. Yomi Adegoke, author of Slay In Your Lane has described it as “So deliciously South London.”

The story follows Glory who arrives back in Peckham, from her seemingly-glamorous life in LA, to mourn the sudden death of her father, and finds her previously-close family has fallen apart in her absence. Her brother, Victor, has been jailed; her sister, Faith, appears to have lost her independence and ambition; and their mother, Celeste, is headed towards a breakdown. Glory is thrown by their disarray, and rather than returning to America she decides to stay and try to bring them all together again. However, when she unearths a huge family secret, Glory risks losing everyone she truly cares about in her pursuit of the truth.

Why are Black women more likely to suffer a miscarriage than others?

“The freedom to laugh, reflect and mourn”: Queens of Sheba play: A review