Pho & Bun builds on the success of Viet Eat Holborn, also a Vietnamese street food restaurant. From its minimalistic design to its dishes, Pho & Bun was created to offer authentic street food at a reasonable price, and in a setting that will make you feel as if you’ve stepped foot into Vietnam itself. 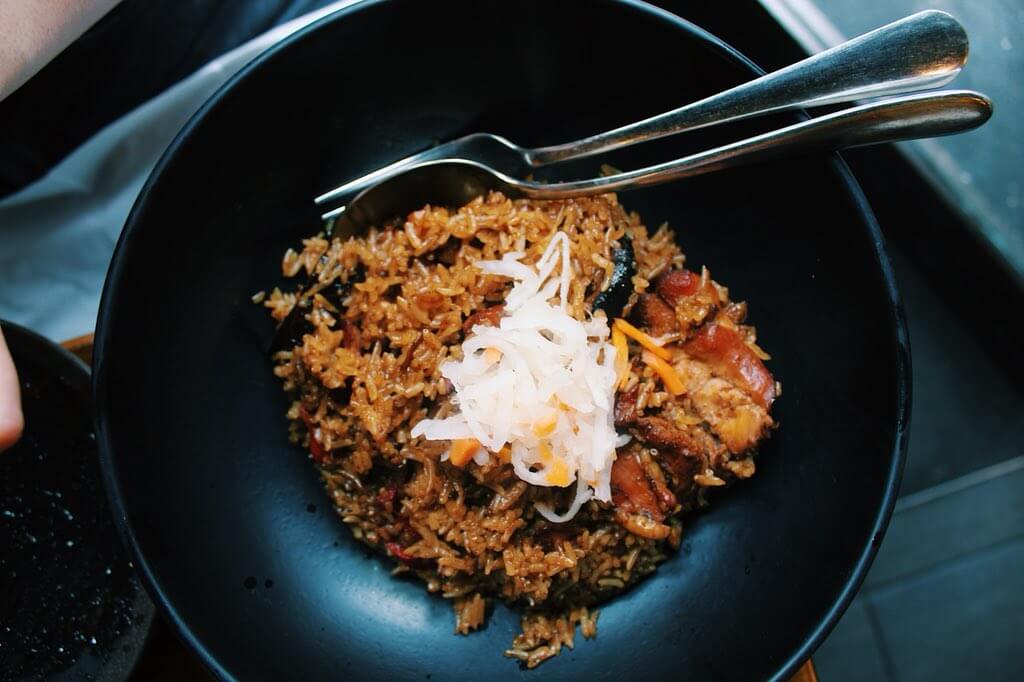 For the starters we opted for the Chilli Salt and Pepper Squid (£8.50), which is also served at VietEat – this has to be one of the best calamari dishes we’ve had. Not only was it well-flavoured but the texture was excellent – a thin crispy batter, well-seasoned with salt and pepper and accompanied by tender and slightly thick cuts of squid. The garnish, which consisted of spring onions, red onions, garlic and chilli, accompanied the squid well giving it an extra flavour – who said garnish only had to be present for aesthetic purposes only? 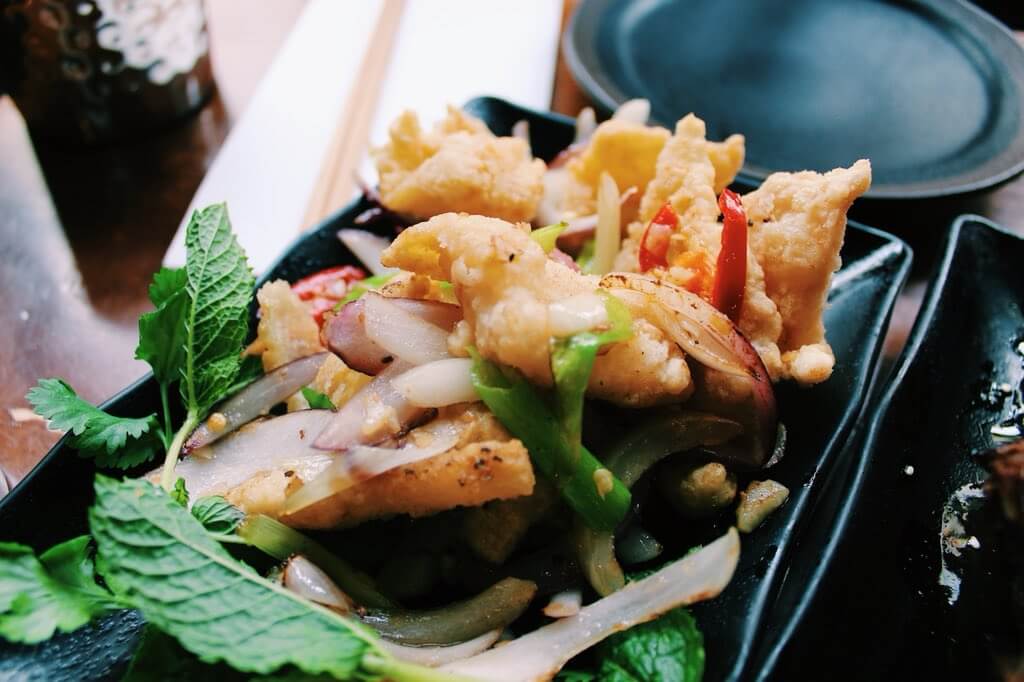 We then ordered the Plum glazed BBQ (£7.95), which had a generous amount of meat on it. The texture was great, crispy on the outside, whilst the meat fell off the bone. The sweetness of the plums complemented the dish. What we liked most about this dish is the fact that there was no excess fat on the ribs.

Following a rather satisfying set of starters, we moved to the main dishes and opted for the vermicelli and rice option. First, we ordered the Vietnamese rice bowl with lemongrass chicken and shitake mushroom (10.50). The dish was lightly seasoned, with generous amounts of thick-cut chicken pieces and shitake mushrooms, which had a lovely meaty-texture, whilst the subtle citrusy-flavour from the lemongrass complemented the chicken well. This was a simple, yet flavoursome dish.

Additionally, we ordered the honey glazed pork belly & pork patties served with Vermicelli (£12.50). The dish was served with a side of lettuce salad and a homemade fish sauce which had a sharp tangy and sweet flavour. Further, the vermicelli was plain in flavour and was a much lighter alternative to the rice dish. We think the plain vermicelli worked well, as the pork and fish sauce had stronger flavours. The pork belly was well seasoned, with a slightly sweet and salty taste, however, the pork patties were slightly underwhelming in flavour, and the dish could do without it as the pork belly sufficed. Overall, this dish was a little blander than the rice bowl, however, if you’re looking for a lighter meal with less intense flavours, then the vermicelli may be a preferred option. 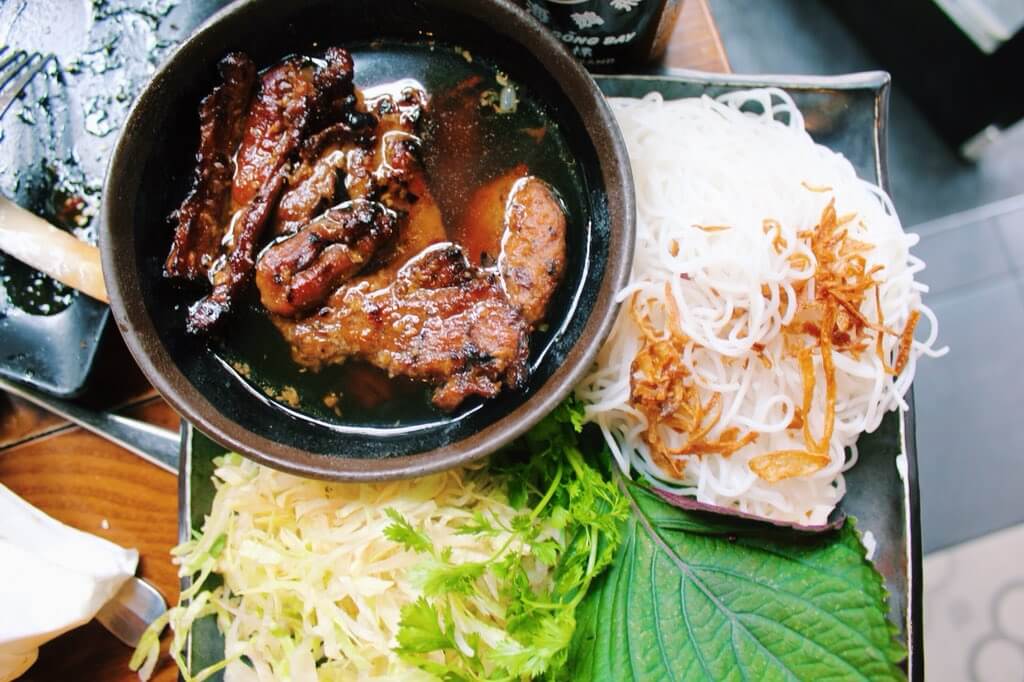 For dessert, we ordered the banana ice cream with peanut brittle (£3). This was a nice cool treat for a hot day. If you love bananas you’ll enjoy this dish as it has the natural taste of banana, not the artificial type you get in flavoured powdered milkshakes. The peanut brittle also gave it a lovely crunch.

We also ordered the bao bun with salted egg yolk (£3.50), which was Pho & Bun’s spin on bread and custard pudding. Now this was an unusual, but pleasant surprise. The bao bun, very similar to a brioche bun but crispier, was accompanied by a very thick, rich and creamy custard made from salted egg yolk. The salty and sweet combination was delightful, however, due to the sweetness of the custard we could only eat it with the bread, not on its own. If you have a sweet tooth this one may be for you!

Overall, here are our final thoughts: good service, pick the rice dishes over vermicelli, and the starters were the stars of this visit, especially the squid. Would we go back? Definitely!

@Melanmagazine
Should your therapist be Black for you to fully get the benefit of the experience? Throwback to when we explored… https://t.co/AXpkFIoYMR
6 hours ago
Need something to read? Throwback to our Seven Days in June review. ''The idea of a love that started in their te… https://t.co/wTO3WR5SwB
18 hours ago
Do you struggle to switch off every night? Here are four tips for better sleep. ''The benefits of going to bed an… https://t.co/cJDzuCVuxV
yesterday
Introducing indoor plants into your home might be the new look you’re craving, but did you know that they can help… https://t.co/26RCgsmTNy
yesterday
Try these three salad recipes from raw-food chef Valerie McKen. Good health and eating well go hand in hand and i… https://t.co/3Zw82QREGM
yesterday
Follow