The man behind the prestigious awards which celebrate black screen excellence is rather unassuming and deprecating. Obviously more comfortable being in the background, Charles is keen to play down his role in putting together the event, which has the impressive tagline of the ‘Black BAFTA’s’; “All I do is tell everyone else what to do!”

Be that as it may, the awards hold a reputation of attracting actors/actresses at the top of their game, all eager to get their hands on one of those west-African masks statuettes. Charles recently invited me along to a production meeting at the venue of the awards, the plush Park Plaza Riverbank Hotel in central London, where I interviewed him and got a small glimpse into the huge scale of the operation, getting exclusive access to the behind-the-scenes workings of an event, which regularly hosts more than 700 guests! 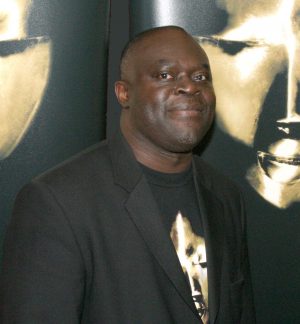 “African parents want you to be a professional, doctor, lawyer, or such like accountant. I became the accountant for several years, but ultimately, I realised it wasn’t really what I was interested in. I began to pursue, by the time I was in my 30s, the media industry. I started as an editor, film and TV, any kind of editing at all and then I went on to become a producer of drama, which is what I’ve been doing for the last 26 years.”

Some of his productions include Brothers and Sisters and Baby Father and in cinema, Last Flight to Abuja and The Mirror Boy.

Known for being something of a pioneer, Charles says the idea for Screen Nation awards was sparked by a vision that he could distribute films on mobile phones back in 2000. He acknowledges that he could have been slightly ahead of his time.

Today, the awards are attended by Hollywood icons as well as home-grown talents such as Danny Glover, Yaphet Kotto, Lenny Henry and Idris Elba, just a couple of the previous winners.

So, how did the awards begin?
“In the year before we started the Screen Nation awards, I created the BFM International Film Festival, along with acclaimed filmmaker, Menelik Shabazz. I later went on to create an awards, which was held in 2001 at the BAFTA. Sadly, the day we honoured two screen icons (Earl Cameron and Harry Belafonte), was also the day that 9/11 happened. I’ll never forget how against the backdrop of a great celebration and dinner, we were watching the towers falling down! We decided to do another event that would acknowledge everybody rather than just a couple of people. So, the following year, foolishly, I created the BFM Film and Television Awards and held it at the Grosvenor House for 800 people and New Nation, a newspaper at the time, called it the Night Of A Thousand Stars, The Independent described it as the black BAFTAs, that’s where it got the tag from.”

When I press him on his use of the word “foolishly”, he said: “Because sometimes you do things and you think it’s only going to be once and then it’s twice, three, four, five times, then you have it forever and you realize “Oh my god, what did I create here”, it’s a bit of a monster, but it’s a beautiful monster and it’s one that’s much needed. But that’s how Screen Nation, was born the following year, out of the BFM Awards. I left BFM and attached the Screen Nation name to it because I wasn’t doing the website then. The first ever Screen Nation awards was held in the Empire Leicester Square in 2003, and it was a fantastic night.”

As much as the awards are such a big part of his life, Charles describes himself first and foremost as a film producer.

“My day job is film producer. Most of the time we’re developing scripts, trying to find the money, packaging projects mostly to be shot in Africa. I work with one or two directors mostly, and in the meantime whilst we’re doing that, I’m talking to the broadcasters and sponsors here for the awards and developing ideas around what the theme will be for the following event, and once my event management team come onboard, we will organize all the logistics for the event in the future. It’s not easy, you know.”

Some of Charles’ most recent films come under the umbrella of Nigerian cinema, more popularly known as Nollywood, or as Charles describes them; African International cinema or new Hollywood. He is passionate about the potential of these productions.

“That space is continually developing, it’s got huge potential. It requires a little bit more intervention from the governments or maybe some private bodies to formalize the space there but there are a lot of entrepreneurial individuals who are not just producing content but also trying to create cinema distribution, online as well as the full cinema infrastructure so that they can serve audiences. It’s lucrative because there’s a couple hundred million people there. Nigerians generally are very interested in art, they will go to cinema if the price point is right. So, yes I’m very excited by that and the inspiration and the motivation they give to other markets to believe that they can actually create something, that’s original to them, that is true and honest, and that enables them to talk about their experiences and their lifestyles through film and video.”

As we come to the end of another film and television award season, which has arguably shown a little bit more love than usual to Black and Asian actors/actresses, I wonder what impact winning a Screen Nation award has?
“For me, winning an award is about showing that everything is possible and that the best of you can be explored and understood, so that everyone else understands where you’ve come from and the sacrifices you’ve made. In the best way possible, it shows the individual who won that there is another possibility for their experience in the industry.

“Because if you’re working really hard, you’re doing everything that everybody else does, but you’re watching other people being honoured, they’re getting more than you, they’re being interviewed more than you but you’re doing just as well and you might believe, “I’m better than that person”. So, when you win an award, it shows that your peers think you are excellent too. People can walk away feeling a little more excited and acknowledged for their efforts.”

Previous Screen Nation awards have been extremely glamorous affairs. What can guests expect this year?
“It’ll be glamorous, glitzy, and black British talent will be out there looking their very finest. We find that sometimes nowadays, they’re doing so well, some of them can’t make it as much as we’d like but that then this gives the opportunity for the light to shine on some of the younger actors, and we know now the younger actors are where things are happening in the UK. We’ve got Daniel Kaluuya, who’s done fantastic in Get Out, and obviously, there’s John Boyega, who’s a huge star now, Gugu Mbetha-Raw and many others. They’re the young ones coming through. Brenda Emmanus will again be doing a fabulous job hosting again. There’ll also be some hot entertainment from young emerging music stars. It’ll be glitz, glamour, red carpet all the way.”

Stepping into her world: Brenda Emmanus