John Boyega embodied raw power, love, and leadership during a Black Lives Matter protect in Hyde Park last week and we were reminded, once again, that he is, and always will be, a real one. 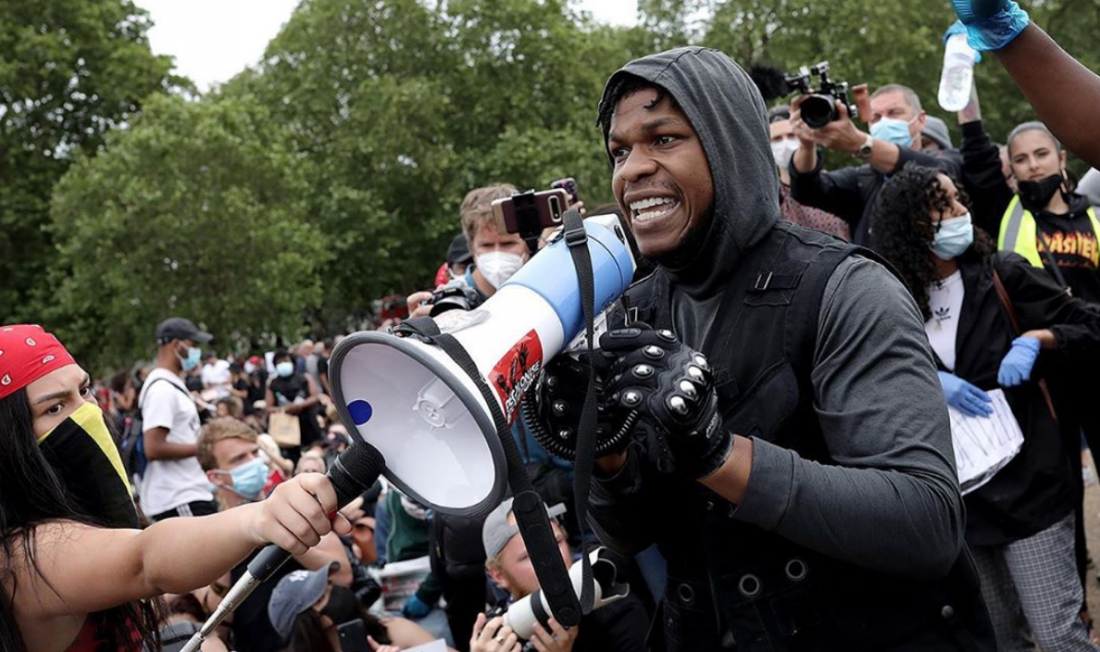 Addressing a crowd of thousands, during his speech, John Boyega held everyone captive, and included a specific message for Black men to take care of their Black women and their families.

London born and bred, John Boyega, has won numerous awards for his acting performances on the silver screen including a Screen Nation Award (2016) for best male performance in a film (Star Wars). But he put any concerns about his acting career to one side to champion a cause that he is clearly passionate about.

Joining thousands of other activists in Hyde Park last Wednesday to stage a protest following the killing of George Floyd, John, with a megaphone in hand and a heart full of love and rage, still managed to urge the crowds: “it’s very, very important that we keep control in this moment, and we make this as peaceful and as organised as possible.”

His speech to the world was impactful, vital and most importantly, truthful. He evoked similarities of the late, great Martin Luther King. Unbelievable that those words are still relevant today.

“Every Black person understands and realises the first time you were reminded that you were Black… I need you to understand how painful it is to be reminded every day that your race means nothing. And that isn’t the case anymore.”

“The arc of the moral universe is long, but it bends toward justice”

“This message is specifically for Black men: Black men, we need to take care of our Black women. We need to take care of them. They are our hearts. They are our future. We cannot demonise our own. We are the pillars of the family. Imagine this: A nation that is set up with individual families that are thriving, that are healthy, that communicate, that raise their children in love, have a better rate of becoming better human beings. And that’s what we need to create. Black men, it starts with you.… We have to be better. You don’t understand. I’m speaking to you from my heart,” John said in between tears, while encouraged by his supporters.

John spoke with passion and unequivocal truth, but this is not new. In all areas of his life, he appears to true to himself. Here are five examples of how John is a real one:

John takes every opportunity to show off his pride in his Nigerian heritage. When John Boyega attended the European premiere of Star Wars: The Rise of Starwalker he not only invited his family, but fans fell in love with how the whole family rocked ‘Aso-ebi’ the traditional Nigerian clothing of similar fabric and colour. On another occasion he proudly took cast co-star, Harrison Ford to Nigerian eatery 805 located in south London after filming at Pinewood Studios had wrapped for the day.

Me and the whole fam at the London premiere for #theriseofskywalker last night!

His faith in God

John never shies away from sharing his faith, always giving glory to God. During his acceptance speech for the Rising Star Award at the BAFTAs in 2016, he said, “first and foremost I want to thank God for this moment”.

John defends us Black Brits. When Samuel L. Jackson criticized the casting of British actors as African Americans, John went high and clapped back on Twitter, ‘Black brits vs African American. A stupid ass conflict we don’t have time for’. On another occasion he called out a scene in Spike Lee’s Netflix series, She’s Gotta Have It, which described Black British actors as ‘cheap’. John called the scene’ trash’.

After recently, tweeting “I really fucking hate racists,” John faced both praise and criticism. With some toxic trolls accusing him of spouting ‘hate against white people’ (really?). John, again, clapped back with wit and wisdom: ‘Pls. I am Yoruba. All your chit chatter on this here app won’t cut into this soul. Thunder fire you’.

Pls. I am Yoruba. All your chit chatter on this here app won’t cut into this soul. Thunder fire you. pic.twitter.com/6wdpPOIODX

After becoming famous, John revealed how much things had remained the same and his love for London town. In an interview with Metro, he admitted: ‘My life is the same, a subtle contradiction: my job, my profession, and then I still come home to this town [London], I still go to the supermarket late at night in my pyjamas’. He even misses the weather, ‘‘I miss the moody faces, I can’t lie, there’s something about the reality and honesty that I like. I just miss London, I miss home.’