Prodigal, written by Maame Blue, follows the introspective transatlantic journey of a daughter, neglected by her Ghanaian father while growing up, but still bound by duty to return to his side as he prepares to breathe his last.

Maame Blue’s debut novel Bad Love was longlisted for the Not The Booker Prize 2020 and shortlisted for the Betty Trask Prize and Award. Prodigal is her short story contribution to Not Quite Right for Us a new anthology of poems, essays and stories by 40 writers whose works have challenged the mainstream. The publication also marks the 10th anniversary of Speaking Volumes. 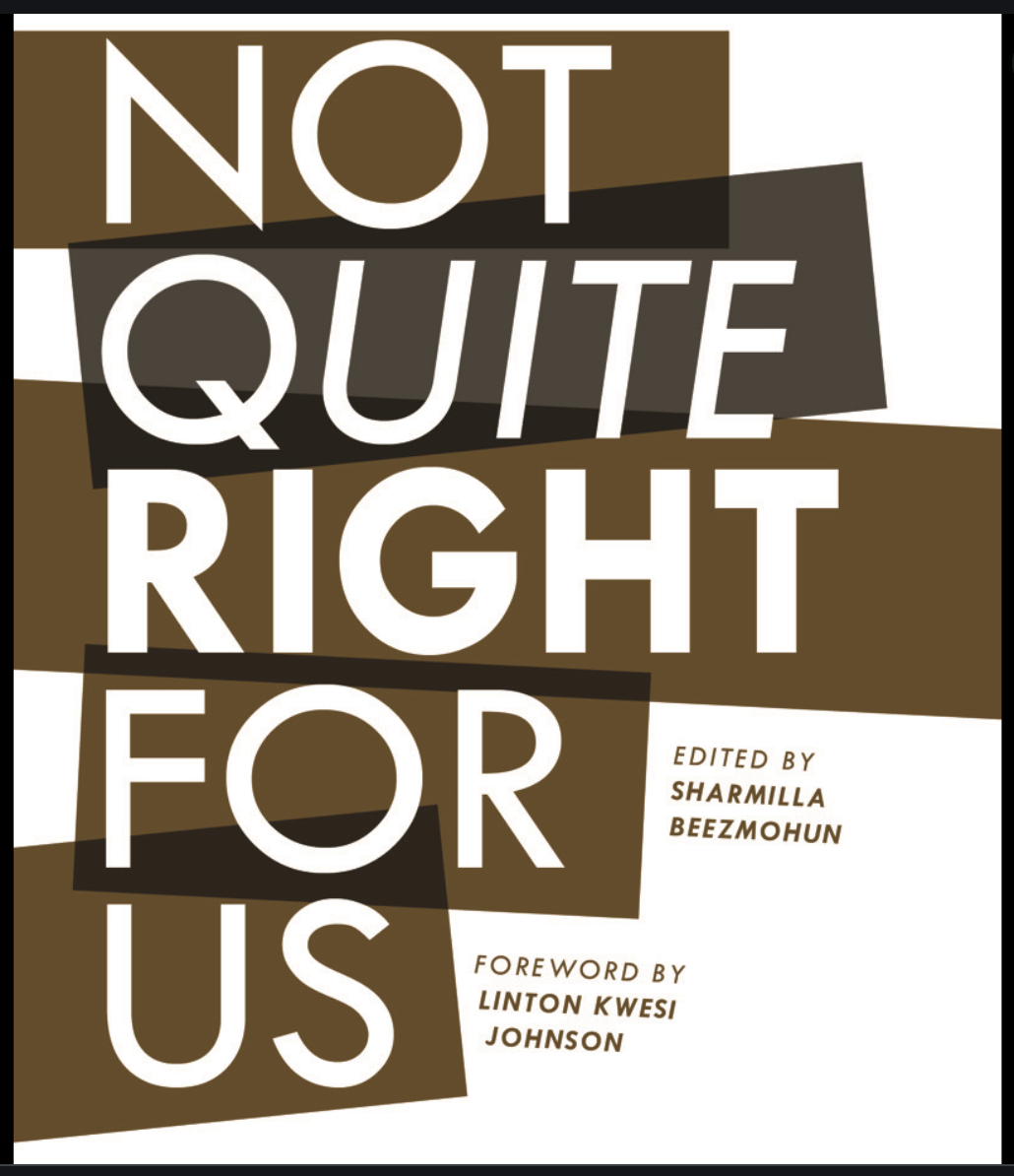 The Not Quite Right for Us anthology spans eight thematic areas (childhood, family, friends, work, travel, love, yesterday/today and today/tomorrow), and features established and up and coming writers, including the likes of Leone Ross, Nick Makoha, Aminatta Forna and Gabriel Gbadamosi. It includes a foreword by Pinter Prize winner, the poet Linton Kwesi Johnson.

Flying to him meant taking herself somewhere she didn’t belong. It was never a journey or a discovery; it was just being somewhere, and then being somewhere else. Nana thought about this as she watched the chunk of money she’d been saving for a new laptop disappear from her account. British Airways thanked her with a confirmation email. She mused over things as she sat in Terminal 5 at Heathrow Airport, its vastness suggesting numerous ways to escape if you only had the means. Naturally she treated herself to a McDonald’s breakfast, the Sausage and Egg McMuffin filling her up for the ten minutes she needed to review her text messages.

She considered the trip to him, to Paa Kwesi, as a movement that churned in her stomach along with her weightless breakfast. Everything about him felt indefinite and nebulous. She did not know which way to move within her feelings for him, so she didn’t. She shut them off as she found her window seat in Premium Economy, slightly more legroom and inches, more seat space so that her thighs were not mashed up against the sides like they had been the last time she’d taken a flight. There was only excitement then, after she’d snapped up a budget-airline deal to visit a friend in Paris. That trip had been years ago — or maybe it was only weeks? It was hard to be sure about time these days. But she could ponder over Paa Kwesi endlessly, as if he was stuck in one timeframe, a frozen image of reproach. Even after all the years that they hadn’t spoken.

She had been dreading the trip, as she always did; the rise of the wheels, the lift-off from the runway, passengers encased in a complex structure of metal and physics that she knew she’d never take the time to understand. Instead she would go through her to-do list, and brace herself for big plates of food, too-green lawns and judgmental looks as she tried to justify her presence, five years older than she had been the last time they had seen her. Before Paa Kwesi had gotten sick. That was a time when she used to make bi-yearly trips to see him and called him ‘father’, trying to forget all the ways he had left her and her mother when she was six years old, to discover his young American Dream. For a time, she had believed that she could forgive his leaving, if only he promised to stay in other ways. If he forged a relationship with her, albeit a long- distance one. If he didn’t speak so disparagingly about her mother, whose parenting had suffered because of his own hands-off approach. As though he was not the reason she’d had to leave the house every morning of Nana’s childhood at the crack of dawn to clean office buildings in Canary Wharf, before spending weekends braiding the hair of other tired mothers, just so Nana could have her choice of breakfast cereals when they went food shopping.

Now Nana could count on one hand the amount of times her mother had mentioned Paa Kwesi, as if saying his name too many times was a devastation that would end her life. So Nana learned how to say it quietly, how to discover things about him through boxes of photographs, whispers from knowing aunties and then, finally, an address. They exchanged airmail letters often, and she would greet the postman as a house guest, opening the front door as soon as she saw him coming, eager for her special delivery — and for her mother not to see. Later she realised her mother knew, as she knew most things that Nana was doing in secret. But still, the thrill of having something that was just for her and Paa Kwesi, it was unmatched for a long time. Even after the letters stopped, after she’d discovered by accident that she was a big sister, after he’d stopped calling.

The thing between them, it was fixed in her mind at a point in time when she was nine years old and her mother let her get on a plane to reach him, to meet the elusive traveller. It was a year of new things. Of a first plane ride, of eating out more in two weeks than she would ever do again in her young life, and of time spent with Paa Kwesi. Who he was and what he did, she couldn’t be sure, but she remembered how he’d carried her up to bed when she fell asleep in the car, tuckered out as the jet lag hit her. Or the pride he wore on his face when he presented her with an outfit he had bought for her; an ugly one that she wished much later she’d kept for posterity, not thrown out in disgust as a teenager.

She didn’t see him again for two more years, as she unknowingly became a sister for the second and third time. During her next visit, Nana saw Paa Kwesi’s dream being realised, in the form of a new family. He had built a big house in the suburbs, wore polo shirts and played golf with colleagues. He belly-laughed with a cigar hanging out of his mouth at family BBQs, and he loved his children. Nana sat off to the side and wondered if she was really one of them, one of the children.

The extract is taken from Maame Blue’s chapter in Not Quite Right for Us: Forty Writers Speak Volumes, out now from flipped eye publishing and Speaking Volumes.

Watch: The Surrogate is a touching film exploring surrogacy and morality