“So that’s what they’ve been putting up beside Stratford High Street DLR Station. I wondered what it was going to be!” My friend was talking about Pitch, London’s newest, coolest, outdoor food and drink venue and open-air cinema. 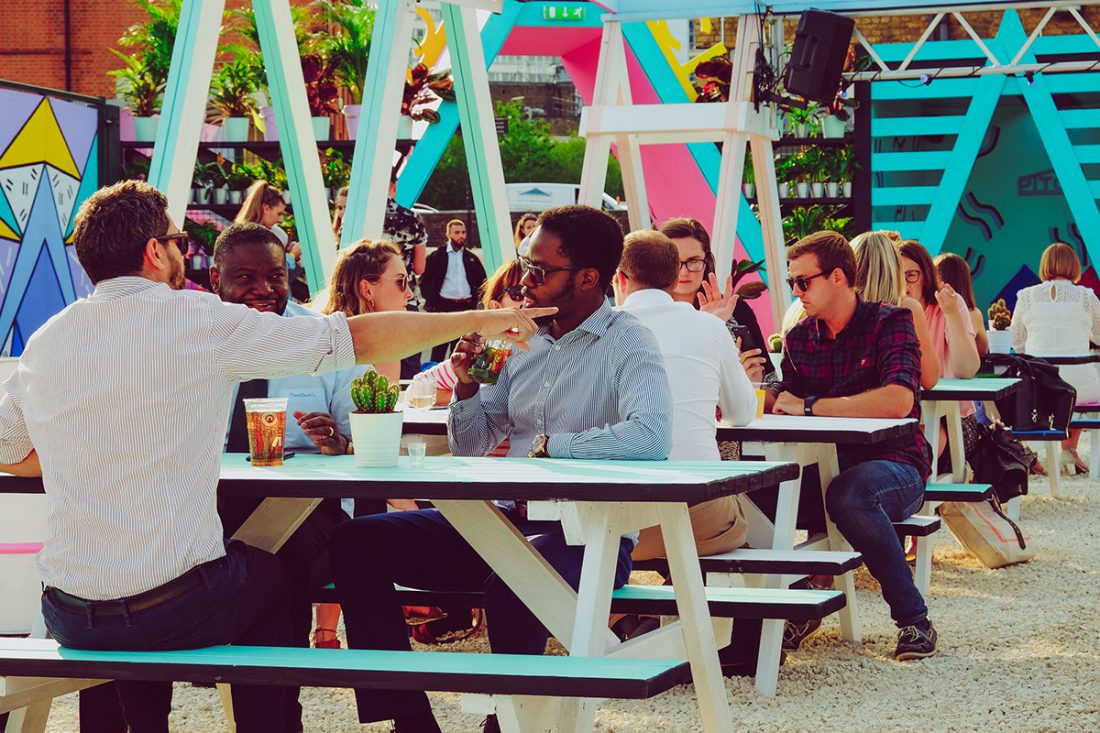 Located in a great spot, minutes away from the hustle and bustle of Westfield Stratford and the Olympic Park, this summer popup is a trendy place to hang out with other uber cool creatives and professionals. 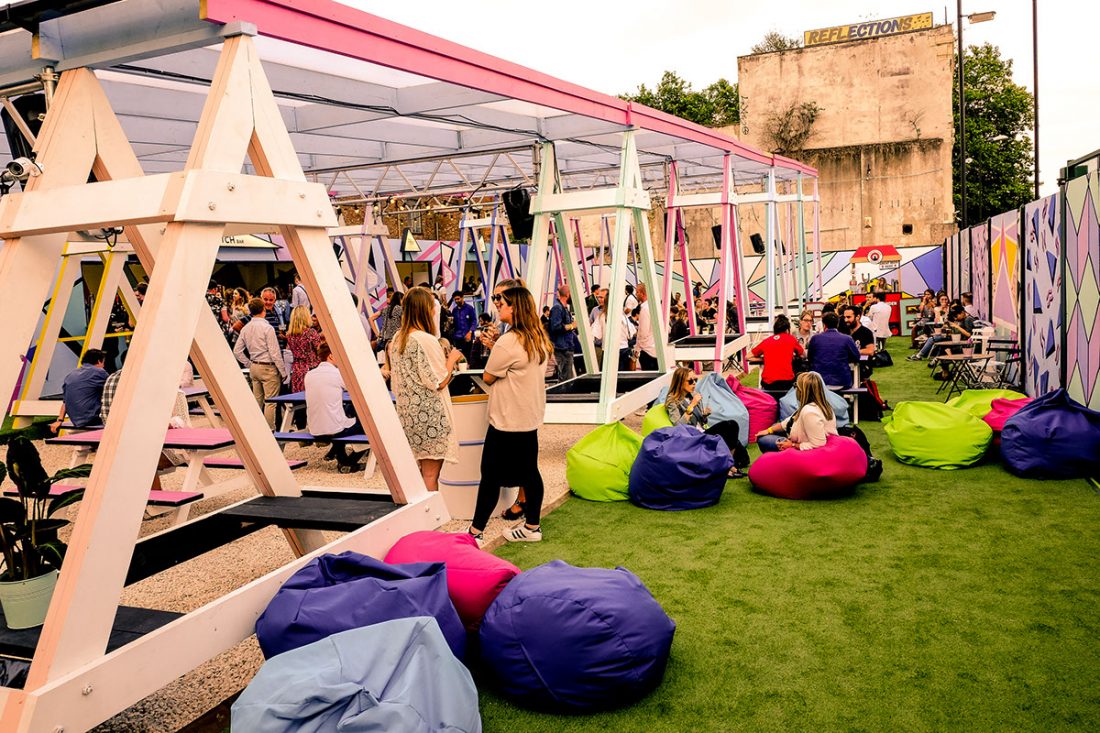 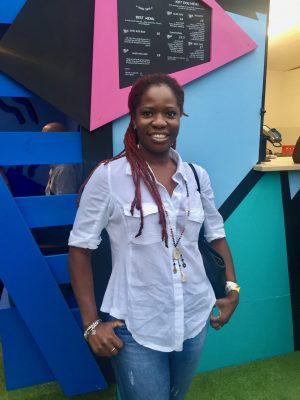 I arrived for the launch party last Thursday (13 July), and entered the space via a unique, triangular ‘garden arch’, and immediately faced a vast, vibrantly colourful, open-plan space filled with canteen style table and chairs arranged in the centre of the canopied structure. You can also reserve a number of more secluded pyramid-shaped enclosures, for those who want a bit more privacy.

With space enough for 400 people, the venue’s main bar stocks cold beverages and delicious cocktails. Yummy smells wafted from alcoves in the side of the venue which housed the permanent street food vendors, including The Gyoza Guys (Japenese-inspired dumplings), Kalimera (Greek food), Tico’s (burgers and hotdogs via Brazil) and The Piadina Project (Italian flatbreads with tasty-looking fillings). After a quick scan of all the nosh on offer I settled on a Tico’s Beef Dog; which was made up of cheese sauce, butter fried onions, off-the-bone pulled beef rib and Brazilian BBQ sauce. I was mentally shutting down all the calorie alarms with each mouthful that I took, but it was delightful!

A big draw for the venue will no doubt be their cinema space where throughout summer they will be playing feelgood movies, from Tom Hanks’ awesome BIG, to Coming to America, The Truman Show and Terminator 2. Settle yourself on one of the many plush beanbags, pop on headphones and you’ll soon forget that you are in the middle of a bustling east London. 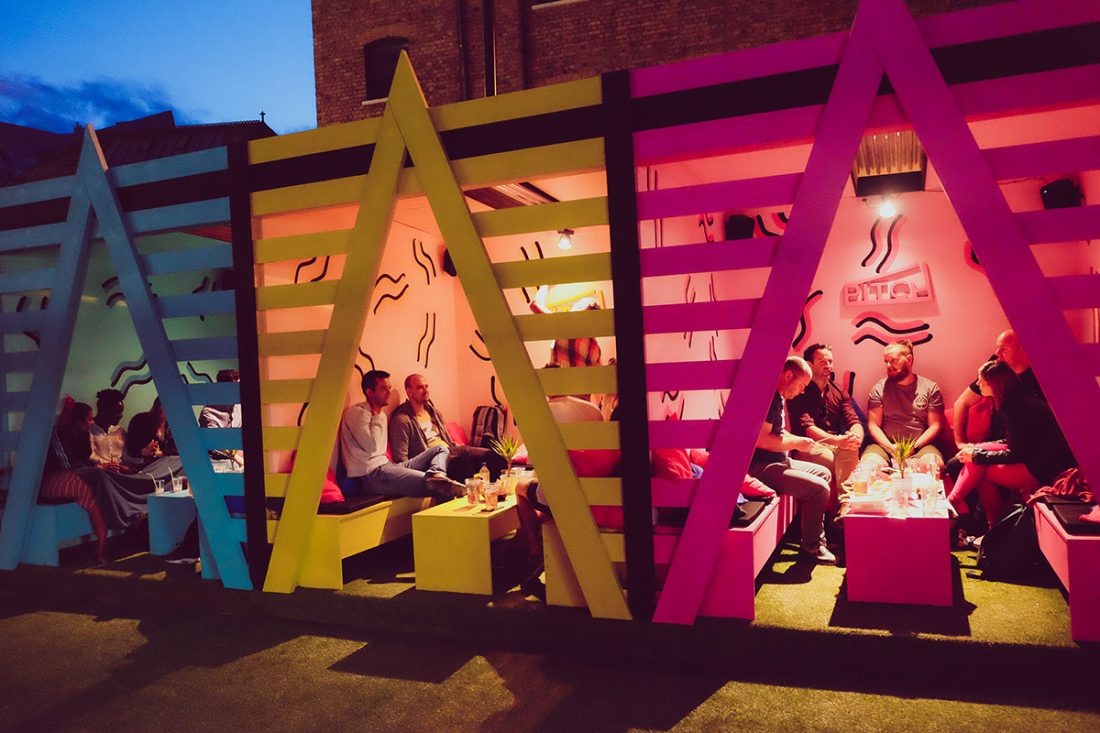 Visit Pitch to find out more and reserve a table for free, here.

Dish of the week: Grilled Salmon and Potato Rainbow Salad

What’s stopping you from getting your five a day?