Missed the BBC Good Food Show at London Olympia between 11-13 November? Melan Magazine’s food contributor, Syeshia Sweeney reviews the annual foodie event, and it looks like it’s definitely one to add to your diary for next year.

Food festival are huge exciting events full of talks, demos, workshops, free samples, food stalls and a huge variety of products for sale, but remember to get your cash ready and be prepared to leave with lots of goodies!

This was my first time at the BBC Good Food Show. So what’s different about it? If you’re a keen cook or baker (or just a big foodie like me), you get the opportunity to see some of your favourite chefs live in action and learn their recipes and techniques. This year, the line-up included Tom Kerridge, Paul Hollywood (Great British Bake Off judge), Michel Roux Jr. (Masterchef judge and presenter), Nadiya Hussain (Great British Bake Off 2015 winner) and Gizzi Erskine (food writer and chef).

Tasting sessions, book signings, interviews and master classes were all available across the different stages at the venue. There was the BBC Good Food stage (interviews and recipe demos), the Supertheatre, the BBC Good Food Kitchen and the Tasting Kitchen (with masterclasses from Le Cordon Bleu, Mews of Mayfair and Culinary Arts Academy Switzerland). The Supertheatre was described as the highlight of the show, getting you up, close and personal with live cooking demonstrations from your favourite chefs. The prestigious Le Cordon Bleu (world famous culinary school) invited you into their world (I had no idea they offered short courses) and Yo Sushi had a 30-minute workshop on how to master the perfect Sushi roll.

Restaurants such as Le Pont de la Tour and Mews of Mayfair had stands offering the best of their menus, so we decided to eat at Mews who were offering a starter of seared salmon (served raw like sashimi) and a pork belly main. The salmon was fresh and with a taste of citrus juices, the texture contrasted with the crunch of the radish and rich sweetness from the bed of beetroot, it was sprinkled with watercress.

The pork belly was succulent, both sweet and salty with a crispy topping and juicy fatty meat.

Later on, we headed to the Heck hotdogs stall. Already familiar with the Heck brand (a regular feature at home cooked Sunday brunch) they were offering both chicken and pork varieties in hot dog buns. Two sausages in one long bun, I decided to go for the pork (minus the onions but lashings of ketchup) but I can vouch for the chicken Italia ones too! A distinctive taste that you should definitely try if you haven’t already.

We managed to squeeze one last course in, well it was more of a snack. Tuna Maki drizzled with soy sauce from the Yo Sushi stand, small bite sized rolls of tuna and rice, slightly salty but balanced by the plain sticky rice.

Throughout the show, we tried samples from various stalls such as Teaforia which offered Matcha and other ground stone teas. The tea is made from powder and you can make teas, ice teas and even Matcha lattes from the various flavours. I had one with ginger, honey and red peppers in it! Perfect for a cold and tasted really pleasant too.

We came across Jim Jam’s healthier spread, described to us as “Like Nutella but won’t rot your teeth”. These are advertised as 83% healthier and I must say the hazelnut chocolate spread was pretty amazing. We also tried their jams, a raspberry one where you could distinctively taste the fruit but the taste was slightly too sharp for me. 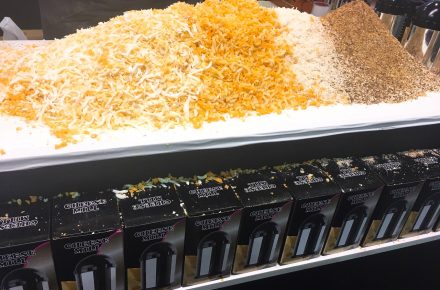 The cheese mill is basically a grater but not just for cheese. The live demo saw bread and crackers inserted to make breadcrumbs and even hard boiled eggs for salads!

The Yanghe sake looked really elegant in the presentation bottle but the stall was quite busy and I didn’t get a chance to sample it. Fine Cocktails are Pre-mixed so that’s more time for you to concentrate on your party. For me, the fresh fruit taste was a little too strong (or maybe it was that I’m not too fond of gin or whisky and I could taste it slightly) but I’m sure it would be great in the summer, crushed over ice. My guest really liked the different flavours and grabbed the three for £15 deal as Christmas presents. These included: Gin, Lychee, Elderflower & Ginger, another was Whisky, Mango, Mint, Agave and also lastly, raspberry, lemongrass and vodka!

Rubis chocolate wine had a huge buzzing crowd so we went over to get in on the action and once they confirmed that the chocolate wine was dairy-free I was in there like a shot (no pun intended). The chocolate wine was divine, it had a chocolate flavour but not the texture. They also had flavoured vodka, the marshmallow and the toffee flavours were right up my street. The sweetness can be evened out with lemonade or you could try them in cocktails. The gift box contained four mini vodkas: marshmallow, toffee fudge, cucumber and mango at a cost of £15.

Suhana curry mixes and seasonings were six for £5. Their stall was busy due to the sample tastings which appeared very popular with guests. They had samples of their butter chicken and chicken tikka masala sauces. The butter chicken was a little salty for me but the masala was very tasty. I took a few packets home for my mum and aunty. They had some for curry lamb but if you are dairy intolerant like me, please read the labels as some contain milk.

There was so much on offer, and it was impossible to taste everything, but we certainly tried! I really enjoyed the premise of “try before you buy”, meaning you could sample everything before purchasing. Aside from this, everyone was very friendly and in great spirits. It’s very easy to get carried away and buy everything that is offered to you because the quality on offer is good (it is called the Good Food Show after all) so if you are that way inclined, set yourself a budget and stick to it.

Oh and a little tip! Every customer gets a goody bag full of snacks, condiments, etc. Go and grab yours on arrival in case they run out of samples at the end. Also if you do one last sweep of the stalls just before closing you might just grab yourself some exceptional deals.

Daddy Do My Hair…and other books representing children of colour

Striving to be a better parent? Try these three top tips